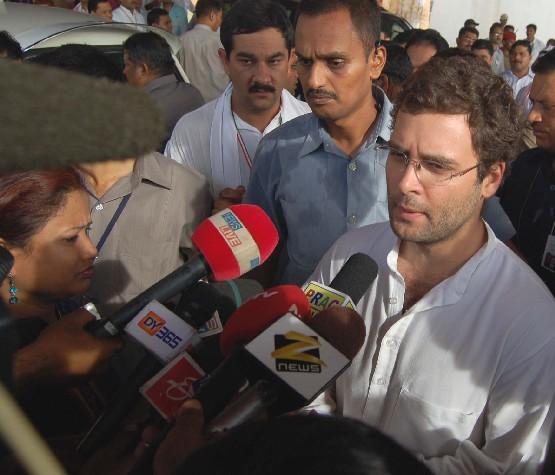 AICC general secretary Rahul Gandhi says only the infusion of fresh blood would make the Congress party more vibrant. Addressing a function at the Rajiv Bhawan on Saturday, he says the youth Congress would get more members across the country. The meeting was addressed by PCC chief Bhubneswar Kalita and Chief Minister Tarun Gogoi.

Thereafter, he left for the youth Congress summit at the Sarusajai and is scheduld to address it before leaving for new Delhi. Earlier, Gandhi arrived at the Lokpriya Gopinath Bordoloi International Airport at 8 in the morning by an Indigo flight amnd was received by Chief Minister Tarun Gogoi , APCC president Bhubneswar Kalita along with other senior party leaders. Then he left for the Hotel Brahmaputra Ashoka. After breakfast he drove to the Rabindra Bhawan and exchaged his views with the students.

7 May 2014 - 12:19pm | AT News
A low intensify explosion seems to have created no less panic in Dhubri on Wednesday.The explosion took place at Bauskata in Fakirganj area in front of a businessman. Identified as Abdul Jawar who...

2 Dec 2007 - 2:31am | pbaruah
The Criminal Investigation Department is spreading its tentacles to unearth the truth behind the Rs 30 crore scam that rocks the Tenth Assam Police Battalion.For the last two days, the investigating...