The meeting of intellectuals, academicians, peace activists, religious leaders held at Guwahati on 7th July, 2009 expressed serious concern about the prevailing situation in North Cachar Hills, the ongoing massacre of people and untold misery of the people especially the Dimasas and the Zemi Nagas is a humanitarian crisis. The participants were unanimous in their solidarity for the victims and has send a fervent appeal to all especially the democratically elected governments and non state actors through the media that civil society do expect much more from the governments who are given the mandate to guide and govern the people of the state. A number of the participants mentioned that among the many problems ailing the people, the corruption of the various development departments who ‘eat up’ the resources is a serious crime. So the State government and the Central governments need to take the responsibility for that. Some suggested that the present conflict is created by forces to destabilize, divide and rule and that the real aspirations of people like basic needs and developmental issues are taken a back seat. The present conflict is beyond limits, the elderly, women, disabled, children etc. suffer greatly. Time and again it has come to the notice of the civil society in and outside the district that the simple, ordinary tribals have nothing to do with this violence, they are only affected because of the presence of state and non-state actors. The armed battalions about 70 companies have not brought normalcy even in the heart of Haflong town. Too much militarization will kill the spirit of respect; it is a bad trend to arm the village folk. The participants made a fervent appeal in the light of the above discussions. Among the prominent persons who actively took part in the deliberations included, Prof. Anuradha Dutta from Omeo Kumar Das Institute of Social Change and Development, Archbishop Thomas Menamparampil SDB, the President of Joint Peace Mission North East India, Meghali Senapati of Tata Institute of Social Science, Samhita Baruah of North East Network, member of Centre for Rights of Hill People, member of Brahmaputra Mahila Samity and K.Jose of Sanskriti, Guwahati. 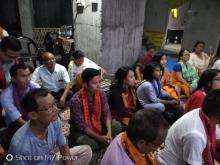 21 Aug 2019 - 9:15am | AT Kokrajhar Bureau
KOKRAJHAR: Six students from Bangladesh took admissin in various educational institutes in Kokrajhar. The students are from Khagrachhari ditsrict of Bangladesh and belong to the Bodo community....