A day-long media workshop sponsored by the International Committee of the Red Cross (ICRC) has begun this morning (June 30) at Hotel Blue Moon in the city. Organised in supoert of Guwahati Press Club, the workshop is attended by over 30 journalists from the States of Sikkim, Tripura, Nagaland, Manipur, Mizoram, Meghalaya, Arunachal Pradesh, Assam and also from Bhutan. Prior to the workshop, the resource persons from ICRC, New Delhi weree felivuted by the participants with the traditional Asomiya Gamosa and Zapi. The first speaker of the program, Yahia Alibi, deputy head of the delegationthe, ICRC elaborated about the mandate and acitivities of the international forum, which has presence all over the world. The second session of the wroksshop was addressed by Dr S. Rajan with the theme of the international humanitarian law, where as Surinder Oberoi discussed about the issue relating to the reporting in time of violence from a conflict zone. 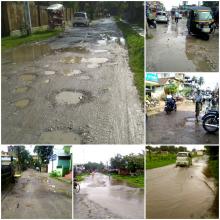 29 Apr 2013 - 7:46pm | AT News
Assam Police have published a list of 11 similar companies that have been collecting money by illegal means and warned people against investing money with them. The list however did not name Saradha...

24 Feb 2008 - 5:59am | editor
Atleast fifteen people have been feared dead at Sonapur when a bus fell into a river after the driver lost his control at the dead of the night on Saturday. According to information, twelve dead body...