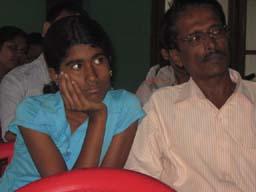 “Please give me a cup of tea” this is the first sentence relaxed Anil says to his wife after coming back home completing tiresome day long initiatives in the Panchayat. Anil got elected recently as a ward member of the Panchayat where Anamika a lady from the neighboring ward also got elected. Both of them came back from the Panchayat at the same time but Anil reached home a little early as he came by his motor bike.

Anamika was also dead tired after her daylong work in the Panchayat. Walking home added to her tiredness. Reaching home she finds lots of unwashed dishes in the sink. Whole the family members had their lunch and dumped the dishes as they consider it as the work of the Buwari (daughter in law) in the family only. Terribly tired Anamika dragged herself to clean the dishes first after changing. Prepared tea for everybody in the family including for herself, cleaned the rooms of the house, brought the cloths from the quad which she put for sun after washing in the morning, took care of the children, made them to seat on the study table, helped them to understand the difficult lessons, started preparing the dinner for the family, took care of her husband and in-laws so on and so forth.

This is the social and cultural difference of job description of Anil and Anamika. A male elected representative and a female elected representative of Panchayat. After the 73rd Constitutional Amendment Act more than 9000 Anamikas come in to power to shape the future of the state. Involvement of women on the social and political decision making is the need of the time to secure the future of the human race.

However, the women leaders coming into power by virtue of reservation is facing problem in the family, society, bureaucracy and political party level. The women leaders could bring about a change fulfilling the aspirations of the Constitution, if there is a public support and opinion for the women leadership in the Panchayats.

Media being the master of public opinion building, no effective women leadership could be expected without partnership of media on the issue. Media and judiciary have set examples of being with the democracy in the country when legislation and executives fails to protect it. Hence, North East Social Trust (NEST) along with The Hunger Project, New Delhi is working strategically with the media of the state to strengthen women leadership in the Panchayats. The Hunger Project is also providing Sarojini Naidu Prize every year to the journalists of India highlighting positive stories on Elected Women Representatives of Panchayats.

Ever increasing numbers of newspapers and TV channels have expanded the need of rural journalists in an exponential rate in the state of Assam. However, there is very little opportunity for the new incumbents to the journalism to learn the basics of this profession before joining the print and electronic media. There was a good deal of demand from the rural journalists of Assam to have some level of interaction, if not training, from competent personality in this sector.

In the month of May 2009 three media workshops were organized in Lakhimpur, Jorhat and Golaghat districts of Assam where more than 100 rural journalists participated. Apart from discussing basics of the Panchayati Raj Institutions and women leadership in it, importance of positive reporting, development journalism and status of media in the state was discussed in these workshops.

Nava Thakuria, an independent senior journalist from the region participated in all the 3 workshops as the key facilitator and emphasized on the present Trend of Changes in the Media, Positive Development Journalism, and Role of Media on Building Opinion for Strengthening Women Leadership in the Local Governance etc.

Thakuria suggested the rural journalists to be vigilant and not to mix the literary writing with the journalistic one. He expressed his concern of harming both the sectors of ‘literature’ and ‘news’ due to mixing in the present trend of media in Assam. He also pointed that the ‘Internet Portals are coming up as a very strong viable alternative space for journalists’. When the state media get bias to special political party or a special school of thought and journalists find it difficult to get space for genuine stories, he should go for writing in Portals whose reader base is escalating phenomenally.

Mrinal Talukder, correspondent of UNI for last 17 years from this region, participated in the workshops of Jorhat and Golaghat district as resource person. He expressed his anguish to the rural journalist on the fact that the “Media of Assam is fast losing its relevance”. The ever decreasing credibility of various newspapers and TV channels among the mass people of the state is of major concern to the media as a whole, he added.

He also pointed the gap between the potential and actual readers of newspapers in Assam. “When we have more than 2.5 crore population, the volume of newspaper readers is not more than 5 lakhs”. Hence, newspaper is failing measurably on building any opinion in the true sense at the moment. Are the citizens of the state rejecting what we write or the way we write? Is the kind of negativity existing in the newspaper is the hindrance of increasing the reader base in the state? These are some of the unanswered questions carried by the rural journalist at the end of the workshops.

This story is written by Tasaduk Ariful Hussain, Executive Director of North East Social Trust (NEST). Hussain is working in the field of community development for last 13 years in various parts of India. He is also the founder of NEST, a voluntary organization working for last 7 years in exploring alternative livelihood, strengthening grassroots democracy and elementary education. Hussain completed M. Tech. and carried out scientific research and teaching before coming into the sector of ‘development’.