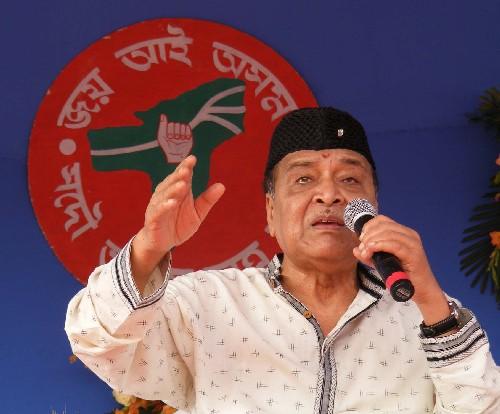 It was a sea of humanity as thousands of people across the north eastern states gathered at the Latasheel Palyground on Sunday to felicitate the noted maestro and film maker Dr Bhupen Hazarika at function organized by All Assam Students Union.

The function began with the felicitation to the living legend by several organizations from the region and outside. This was followed a thrilling cultural show that made Dr Hazarika spell bound. Dr Hazarika in his short but illuminating speech thanked the gathering and the organizers and hummed a few of his evergreen lyrics.

Later he was felicitated by a band of 671 boys boys and girls with bihu sings in their lips. They sang and danced and made the Latasheel playground a throbbing where Asom Ratna joined them.

On Saturday, Dr Hazarika unveiled his own statue made of glass fibre beside the historic Dihgalipukhuri in presence of thousands of his fans at the initiative of AASU.

Permalink Submitted by Arabinda Saikia on Wed, 25/02/2009 - 21:34
we should propose to central govt. for confering Bharat Ratna award to Dr. Bhupen Hazarika.

Permalink Submitted by Rupak Sarma, Ba... on Mon, 16/03/2009 - 17:22
Though miles away from home we feel an immense happiness to see the living legend Dr. Hazarika taking the Asom Ratna. Hearty Thanks to AASU for bestowing such respect and honour for our own Bhupen Da 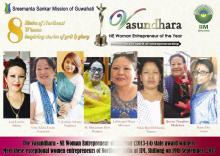 16 Sep 2015 - 6:44pm | AT News
The 2nd Vasundhara NE Woman Entrepreneur will be conferred on September 19 at Shillong. instituted by Sreemanta Sankar Mission of Guwahati, the wvent will see eight exceptionally...

9 Jul 2013 - 11:47pm | Peter Alex Todd
Department of Cultural Affairs has constituted the District Level Silpi Award to honour senior artists who are socially and culturally recognized for their remarkable creations, dedication and...

ULFA will always protect the rights of the indigenous people: Rajkhaowa

13 Oct 2011 - 2:21am | Ritupallab Saikia
Ulfa Chairman Arabinda Rajkhowa, today visited the sensitive Assam-Nagaland boundary, and interacted with local people and to get a first-hand knowledge of the situation prevailing in the border....