There is report of simmering tension in Jalpaiguri district early on Tuesday morning as supporters of Gorkha Janamukti Morcha and anti-Gorkhaland group clashed with the Akhil Bhartiya Adivasi Vikas Parishad (ABAVP) activists. According to information, the incident took place after GJM supporters raided and ransacked the house of a ABAVP leader, John Barla, in Lalkipara tea estate area.

Irked by the ransacking of their leader's house, ABAVP activists torched three houses of GJM supporters in the area.

5 Jul 2011 - 2:56pm | Mowsam Hazarika
Under food grains (Category II), the Union Agriculture Ministry has given the best performance award for the year 2010-11 to Assam. This was informed by the ministry to Chief Minister Tarun Gogoi...

28 Nov 2014 - 3:57pm | AT News
Tourism Department of Assam Government has taken initiatives to start training young people who can become tour guides and become self employed. A training programme of tourist guides was held in... 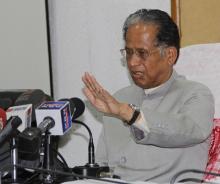 18 Feb 2015 - 6:25pm | AT News
Chief Minister Tarun Gogoi on Wednesday accused the Centre of downplaying the miseries of the flood hit people.Addressing a press conference in Guwahati on Wednesday, Gogoi said that the Centre has...