Prime Minister Dr Manmohan Singh on Saturday morning has left for Shillong to inaugurate the Indian National Science Congress oganised by the North East Hills University. Amid tight security ring Dr Singh arrived at the Nehru Stadium helipad and was received by Chief Minister Tarun Gogoi before laving for Shillong by a helicopter.

The Prime Minister, who arrived in the city on Friday evening a day after the serial blast rocked Guwahati leaving nine people dead and many others injured. Immediately after landing at the LGB International Airport, he droved straightly to the Guwahati Medical College Hospital and visited the blast injured people with Chief Minister Tarun Gogoi and some other ministers. Talking to reporters the Prime Minister said his government will firmly deal with the terrorists that foment trouble to destabilize the country. He further announced Rs 2 lakh each to the family members of those killed in the serial blast.

7 May 2013 - 9:24am | Rubee Das
Jahar was thankful to the doctor because he got well very soon. Well, the doctor and others told him repeatedly to continue his medicine for six months but he was very confident that he had got rid... 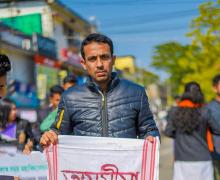