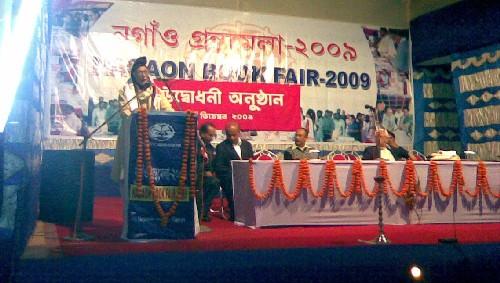 In the inaugral ceremony noted writer Mahim Bora of Assam Sahitya Sabha addresses the gathering as chief guest and insisted that he does'nt belong to any community by virtue of language and his write-up is open for one and all who can feel own narration in it. He further elaborates the importance of books in today society where definitely reading is good thing compere to become merely couch potatoes.

Later, the mela area is opened for the public by cutting of ribbon by the Mela President Rockybul Hussain. The book mela is targeted for all the age group and catering to the need of almost everything form courseware to fiction work by many noted writers brought here by publishers belonging to far places. The mela is having many cultural program as parts of it on every evening till end including group discussion chapters on todays reading. The today function was anchored by Rong Bong Terang.

17 Aug 2009 - 8:09am | editor
Prime Minister Dr Manmohan Singh would step up to nab the killers of Assam journalist Kamala Saikia, who was murdered by the separatist militants 18 years ago. This was disclosed by Dr Singh as...

22 Aug 2008 - 3:52am | editor
The season for exhibitions begins at NEDFi-Haat with the inauguration of the annual week-long “North East Handloom & Handicraft Fair 2008” on August 21. The exhibition was inaugurated by...