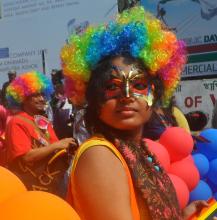 9 Feb 2014 - 11:59am | AT News
Hundreds of gay activists took out a huge procession in Guwahati on Sunday in protest against the move to prevent their rally in the city.With banners and festoons in the hands, activists who...

4 Apr 2014 - 1:16am | Hantigiri Narzary
An objection have been raised against Naba Kumar Sarania @ Hira Sarani, consensus candidate of Jonogostiya Aikhya Mancha and pro-talk ULFA leader, who has filed nomination to the No. 5 Kokrajhar Lok...