10 Jul 2014 - 10:58pm | AT News
Chief Minister Tarun Gogoi said that the budget was very disappointing for Assam. Hours after Union finance minister Arun Jailtely tabled his maiden budget, Gogoi said that there is no indication of... 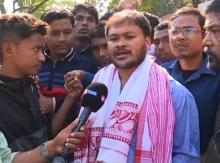 30 Jul 2015 - 8:08am | AT News
Are you waiting to visit Dhemaji comfortably unlike the journey by bus? Days are not far when you will be able to reach the distant district by train. Courtesy Northeast Frontier Railway....