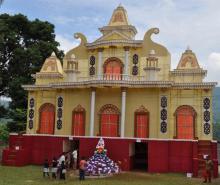 17 Jul 2017 - 10:07am | AT News Imphal
Three people were injured when a powerful IED exploded in Imphal East’s Khurai Ahongei around 10:30 am Monday. The injured are W Ibomcha Singh, 53, resident of Khurai Soibam Leikai, Md...

3 Nov 2020 - 5:31pm | AT News
Guwahati: Former Chief Minister Tarun Gogoi is stable.  According to Guwahati Medical College Hospital authorities, the former CM who was rushed to ICU on Sunday midnight is properly...