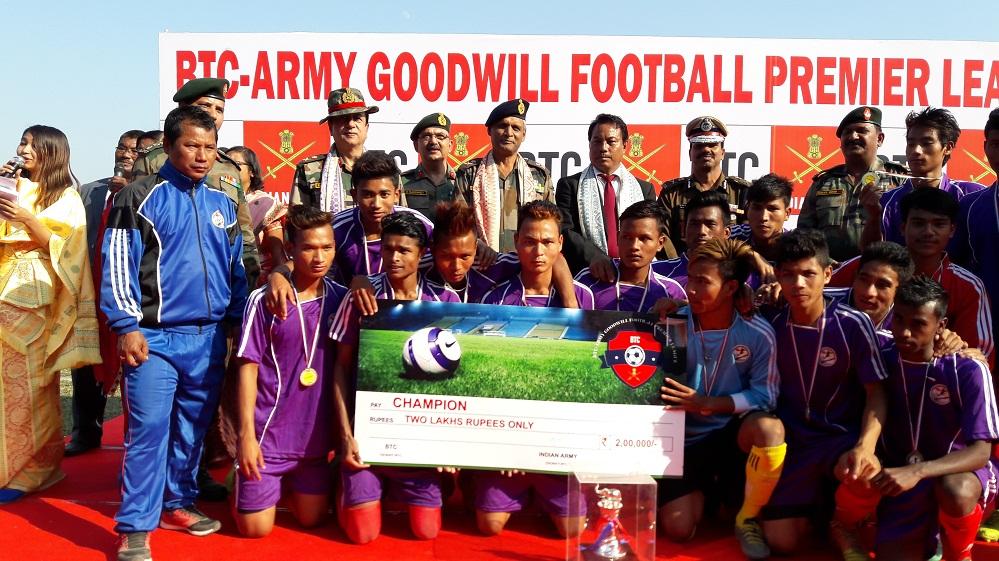 In the final match,both team Baksa and Chirang were played draw with goal-less in the full time. Later,Baksa beat Chirang 4-2 via tie-breaker shots and lifted the premire cup,which was jointly organised by BTC administration and army to promote unity and spread goodwill among the peoples in the region.Four teams from four districts of BTAD took part in the semi finals of the premiere cup and Kokrajhar and Udalguri stands at second and third runners up respectively.

Maj Gen Rajeev Sirohi, GOC, Red Horns Division said that the Indian army and BTC administration have joined hands to provide a common platform for unlesahing the passion of youth in the districts of Chirang,Kokrajhar,Baksa and Udalguri to demonstrate their talent at the most thrilling sport in Assam.He said it is an event to tapping the unexlpored potential of the youth in BTAD promoting unity and spreading good will among people.He also said that army has been stressing to bring forth the vision of alleviating the problems of the youth and weaning them away from the path of violence,and have made a comprehensive roadmap under the operation sadhbhavana project in the region.He has lauded initiative taking out from BTC-Army to uplift sporting arena in the state.

BTC deputy chief Kampa Borgoyary extending thanks to the army authority for organising such sporting event in the region which is giving sports enthusiam among publics.

Dogra regiment of army organized an exhibition of arms under operation sadhbhawana project at SAI SAG Centre during final match in Kokrajhar.Peoples from all walks of life thronged to see arms display. Army officials from Dogra regiment explained aims and views of the arms display in the ground. Visitors also expresses their happiness after visiting the exhibition programme.Sony TV Super Dancer grand finalist Masoom Narzary was also given warm felicitation on the occasion.BTC Cultural affairs department felicitated Masoom Narzary with bookey and given away cheque of 50,000.

15 Aug 2015 - 12:02pm | AT News
Amid simmering controversy over the NRC base year, Chief ministerTarun Gogoi on Saturday said that the government is committed to detect and deport the Bangladeshi immigrants who came to Assam...

2 Mar 2015 - 8:33pm | Abdul Gani
Assam chief minister Tarun Gogoi assured to enact a law to deal with witch-hunting and its manifestations. Talking to a seven member delegation of Coordination Committee against Superstitions at his...

Workshop on Entrepreneurship and Patents held at ADBU