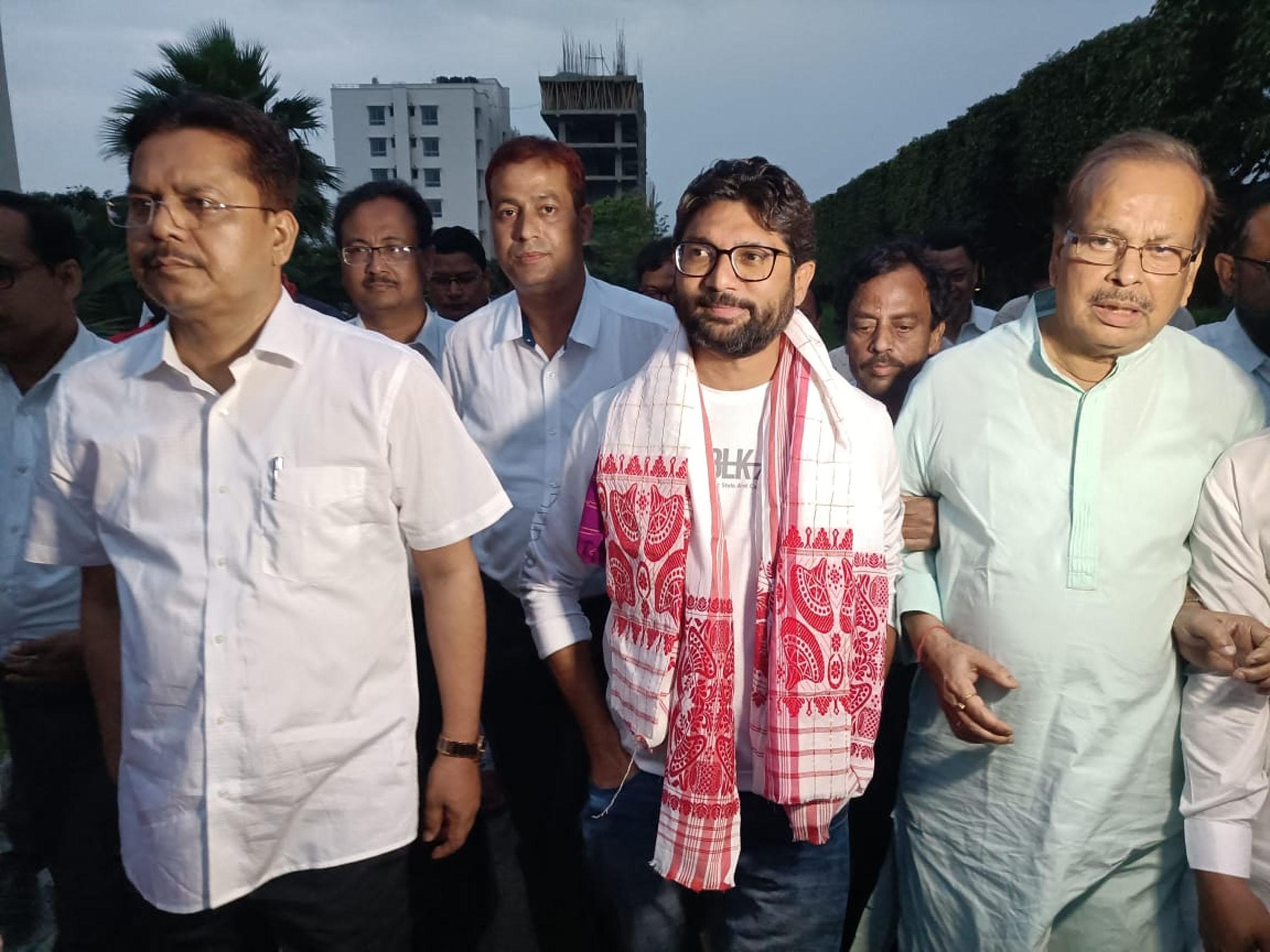 An Assam court grants bail to MLA Jignesh Mevani in the assault case and pulls up police for filing false FIR against him.

Jignesh Mevani was slapped with another case and was arrested on Monday night for the second time soon after he was granted bail by a court in Kokrajhar.

Jignesh's  first arrest, based on an FIR filed by Arup Kumar Dey, a BJP worker from Kokrajhar. He had alleged Mevani of making derogatory tweets against PM Modi and of inciting enmity between the two communities.

Whereas there was nothing wrong with that tweet, claimed Raijor Dal supremo Akhil Gogoi.

While Mevani managed bail for his case, he was again arrested by the Barpeta Police for assaulting a female police official and outraging her modesty while she was escorting him from Guwahati airport to Barpeta.

He was booked under sections 294(obscene act in public), 323(punishment for voluntary causing hurt), 353 (obstructing public servant availing his duty) and 354 (assault or criminal force on woman with intent to outrage her modesty) by the Indian Penal Code(IPC).

On Thursday, the session court reserved its order for Mevani's bail.Though his first bail plea was rejected two days ago by a local court, he managed to roam under the sky as he was granted bail on Friday.

In its order on Friday, Aparesh Chakravarty, Barpeta district and sessions judge, said the Gauhati High Court should direct the police to reform themselves to prevent registration of “false FIRs” and give credibility to the police’s version that the accused persons try to escape their custody.

“Otherwise our state will become a police state, which society can ill afford,” the judge said.

The court said that it has been a “routine phenomenon” in Assam as the police claim that an accused person tried to flee and the personnel had to shoot at them, leaving them dead or injured.
The session court further directed the police to release Mevani after he furnished a bail bond of Rs10000.

The court judge quoted the alleged pushback of a female police official from her seat cannot be considered for outraging her modesty as male officers were present in that Vehicle at that time of the incident.

The complainant had given different versions of the incident to the police and the Judicial Magistrate, the court pointed.

A female police official had told the Majistrate that the MLA did not use his hand to assault her.She further mentions the alleged abuse in his vernacular language.

“In view of the above testimony of the victim woman, the instant case is manufactured for the purpose of keeping the accused Shri Jignesh Mevani in detention for a longer period, abusing the process of the court and the law,” it added.

After his release from the Jail, Mevani speaking to the Assam Times, said it was a “cowardly act” by the BJP Government to use a female police official to file a case against him.

“The Government could not stop youth leaders like  Akhil Gogoi, Kanhaiya Kumar, Hardik Patel after imposing many cases against them. How could they stop me? I have been fighting and will fight against the BJP and the RSS till my last breathe.” he mentions.

Body found on train at Chaparmukh

2 Jul 2017 - 9:59pm | Dibya J Borthakur
The body of a man was found on a train that arrived at Chaparmukh junction from Tinisukia on Sunday, police said. The body, found under mysterious condition, was identified as Kiranjyoti Hazarika of...

17 Aug 2015 - 8:05pm | AT News
Assam is bracing up for yet another devastating flood wave if the weather condition is any indication. Weathermen on Monday predicted heavy rainfall in the foothills of Himalayas over the next week...