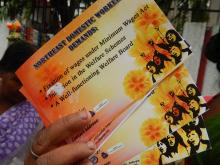 14 Jun 2016 - 11:01pm | Anupa Lahkar
A postcard campaign comprising 200 domestic workers from across the state on the occasion of International Domestic Workers Day was held at the Meightdoot Bhawan in the city. This was done under the...