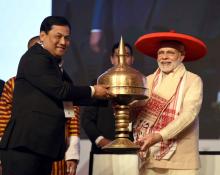 3 Feb 2018 - 2:15pm | AT News
BOBBETA GOGOI GUWAHATI: Assam Chief Minister CM Sonowal vows to help the north eastern state emerge yet another hot destination for the global investors cross the globe. In his address at the...

25 Feb 2018 - 10:34am | AT News
TURA: Security forces in and around Adangpak village in the East Garo Hills of Meghalaya are continuing the massive operation in search of another dreaded north eastern rebel leader a day after they...