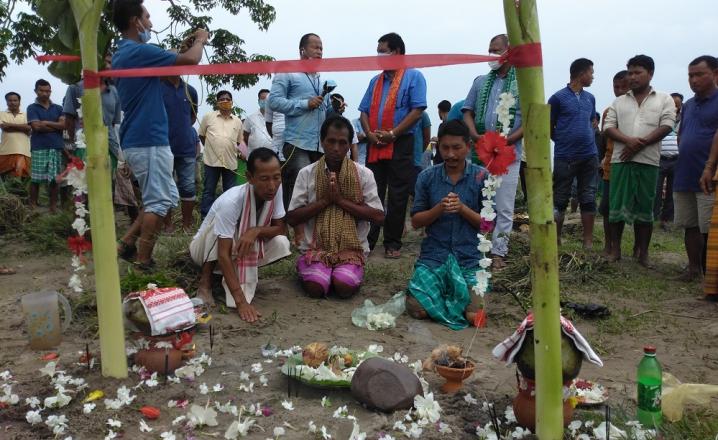 KOKRAJHAR: A Bathow puja was offered to Ganga goddess to get rid of protection from flood and erosion hit at Sikarbil village along the Gongia River in Kokrajhar district on Tuesday.  Villagers from greater Sikarbil area under Dotma revenue circle have come out to be part of the offering Puja to the almighty God at the Gongia Riverbank.

The Puja was organized to worship the goddess Ganga as local MLA from Kokrajhar West constituency Rabiram Narzary initiated river channel to divert the Gongia River to control the erosion site along with the Sikarbil village.

At-least 28 families have been eroded due to floodwaters erosion of Gongia River and forced them to be homeless and taking shelter at relief camp since few a week ago.

While highlighting the offering of prayer and worship, a villager has expressed his belief that only Almighty God can save the erosion and flood-hit, so we are coming here to organize a Bathow prayer along the river bank.

The Gongia River has been flowing from Bhutan hills to the downstream which has been hitting the citizens who are living along the river banks.

The river diversion step was initiated by MLA Narzary from his own responsibility to extend control and stop the riverbank erosion sites.

The diversion of cannel cutting would be approximately two-kilometer length to pass the zigzag route of the river flow via straight route as citizens have put demanded protection of the erosion and flood-hit.

Relief camp inmates who are taking shelter in the camps informed that they have become homeless as Gongia River completely devastated their house and properties due to strong erosion and flood-hit.

"Public representatives and government officials are rushing the eroded sites every year, but no strict steps were initiated to check the riverbank erosion. Villagers from the greater Sikarbil village every year face the erosion like hardships in their leading life. The Georgia River's effect towards the villagers seeing since last few three years ago.No sufficient measures to construct of protection was seen from the concerned authorities", said flood affected peoples.
They hailed the initiative to construct River diversion channel cutting steps by MLA Rabiram Narzary said that the diversion measures would extend little relax towards the erosion situations in the nearby villages.
They have demanded proper protection of the flood and erosion hit incidents along the Gongia River for permanent sustainability in the area.

MLA Rabiram Narzary told that he has come forward to check and control the flood effect and erosion hit among the citizens at the Sikarbil village and its adjoining areas. He informed that he had approached the water resources department last year to control the river erosion and flood hit, but the concerned department so far yet to release the necessary fund to meet the erosion. He said that he has been stepping to control the erosion and flood affect situation from his own initiative by incurring necessary financial involvement.

Narzary said that no fund has been reached to check the River erosion from the state government and water resources department to check the riverbank erosion.

He has urged the minister of water resources department, governor of Assam Prof Jagdish Mukhi, who is now head in BTAD administration to take strict measures to protect the flood-affected areas and construct strong bundhs or embankment in the district where common masses are facing massive erosion.

BPF candidate for Dotma constituency, Prakash Basumatary has lauded MLA's stepping to construct river diversion measures on the Gongia River and hoped that citizens from the area are getting relief from the erosion hit and flood effect in near future.

He also remanded a strong embankment construction on the river bank to check erosion among the residents in the greater Sikarbil areas.

1 Feb 2015 - 4:03pm | Jutika Mahanta
On the occasion of Magh Bihu, the Assam Association, Mumbai, organised a cultural program with much fanfare in Vashi on Sunday, 18th of January 2015 evening. Around three thousand Assamese people...