26 Jan 2020 - 1:11pm | AT News
A group of ASSU and AJYCP activists today waved black flags to minister Dr. Himanata Biswa Sarma. They were protesting against the Citizenship (Amendment)Act in front of the Nurul Amin Stadium... 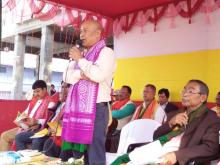