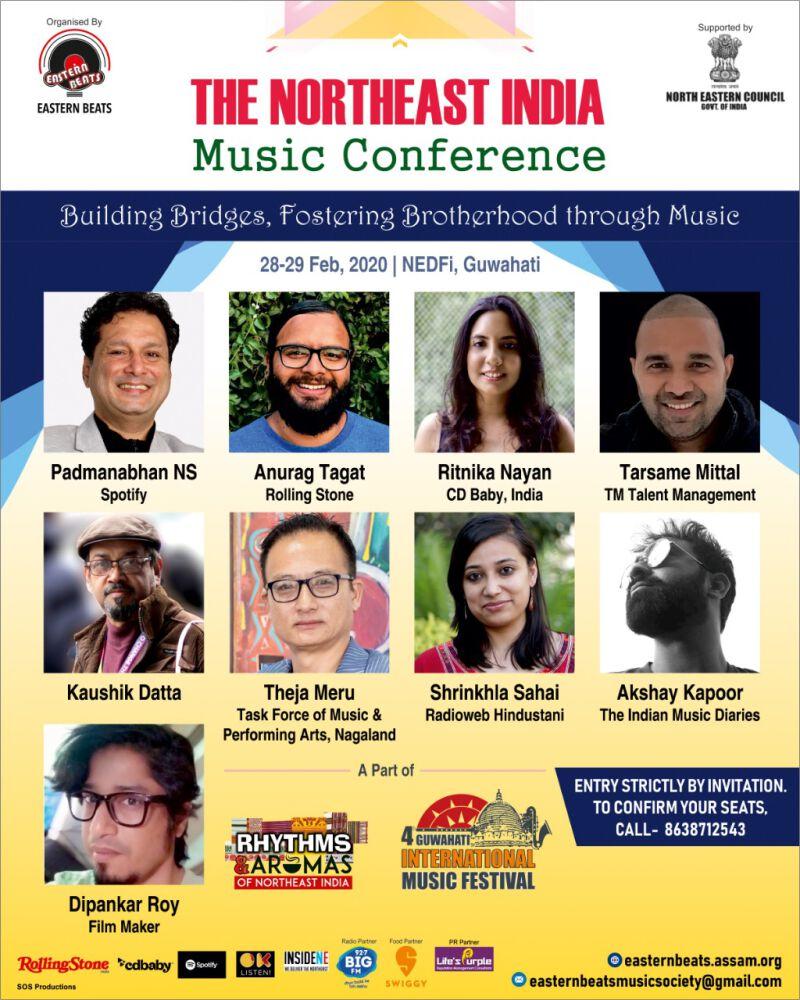 The Northeast India Music Conference will witness participation of some of the biggest stakeholders of the global music industry who will provide mentorship to the musicians from the region who were selected through auditions at Dimapur, Shillong, Ukhrul and Aizawl in the last two months. State-level music auditions were held across the Northeast in a unique Pan-Asia music project, Rhythms and Aromas of Northeast India, which was held in collaboration with North Eastern Council, Government of India.

Eastern Beats Music Society will also be signing a few agreements with the participating organizations for speedy development of the region’s music industry. “We will be signing more than 6 MoUs with global giants of the music industry, like RollingStone India, Spotify, CD Baby, Indian Music Diaries, etc, which will greatly benefits the musicians and stakeholders of the music industry of Assam and Northeast India,” said Eastern Beats Music Society Founder Secretary Aiyushman Dutta.

The unique music conference will be a prelude to the 4th Guwahati International Music Festival which will be held at Silpgram in Guwahati on February 29 and March 1.

The musicians taking part in the music conference were selected through auditions held across the 8 northeast states. Bands from Nagaland and Assam took part at the auditions in Dimapur in the end of December, 2019 as part of the Pan-Asian music project ‘Rhythms and Aromas of Northeast India’, which was supported by the North Eastern Council, Shillong. Likewise, the bands from Meghalaya, Arunachal Pradesh and Tripura took part in the Shillong auditions. Later, auditions were also held at Ukhrul – for Manipur and Sikkim and at Aizawl for Mizoram.

8 Nov 2010 - 11:45pm | editor
At least 8 people have been killed when NDFB militants struck in Sonitpur district on Monday. The gory incident took place when a group of suspected cadres of the Bodo rebel outfit halted a passenger...

11 Apr 2014 - 8:05pm | AT News
The Assam Public Service Commission has announced the schedule for the Assam Civil Service Combined competition   examination.In a press release, the panel informed that altogether 2,900...