The National Investigation Agency has chargesheeted four hardcore NDFB-S militants in the gory Adivasi carnage in Sonitpur and Kokrajhar districts .

Of them, three have been languishing in jail after they were caught in Kohima. The fourth one was arrested in Biswanath Chariali area.At least 30 people were killed in a series of simultaneous attack in Sonitpur and Kokrajhar districts on December 23. 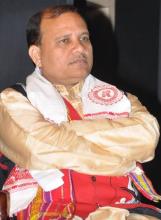 Sahitya Sabha gets Paramananda as president

29 Dec 2017 - 9:28am | AT News
GUWAHATI: The Asom Sahitya Sabha is all set to get Dr Paramananda Rajbangsi as its president. The state's largest literary body conducted a ballot voting recently at its headquarters in Jorhat where...