KOKRAJHAR: Along with rest of the state,the Pradhan Mantri Matru Vandana Saptah was celebrated in Kokrajhar,heart of BTAD administration to mark the activities carried out amongst the society by anganawadi workers and supervisors of the integrated child development schemes(ICDS) under Social welfare department.

The Saptah celebration showcase an attractive food items which are needy for human body growth and development which have attracted amongst the attended gathering in the event which were prepared by ICDS project worker and supervisors in the district.

Best performance ICDS worker,supervisors from different blocks in Kokrajhar district was offered warm felicitation and given away away awards as well as citation and trophies on the occasion for dedication their best services.

Phukon said that the Matru Vandana Saptah was celebrated to create awareness and socially uplifting of the citizens across the state.He said that the Saptah has celebrated by Social welfare department in the state and district officers were involved in the programme initiative which saw participation from different block ICDS worker and supervisors in district level. 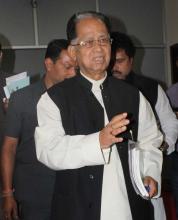