Cry against terrorism - the Guwahati style 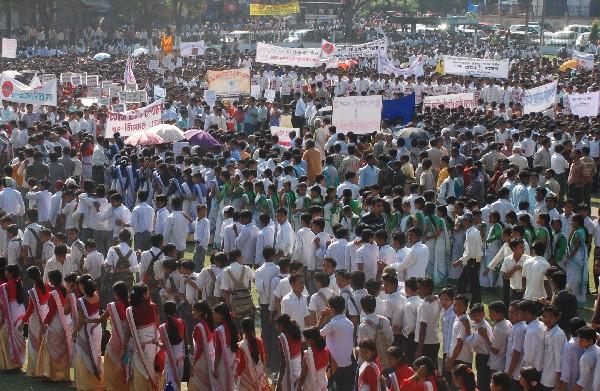 Undeterred by a scorching heat people thronged in thousands at the Latashil Playground on Tuesday and participated in a protest rally organized by the All Assam Students Union to take a solemn vow to end terrorism. These people were taking out a procession on the city streets to send a strong message against the terrorist forces who have been mongering troubles for years. With banners in their hands, they shouted slogans against the terrorist and also against the Bangladeshi immigrants residing in the state saying them the mother of all troubles. Notably, hundreds of people are coming even from the outskirt of the city by bus to participate in the rally. The death of over eighty people in the serial blast on recent in the state has made these people shudder to think that its high for an united stand against the terrorists.

10 Jan 2018 - 9:57am | Mithun Baruah
MARGHERITA: The Asom Sangrami Chah Shramik Sangha affiliated to CPI(ML) Panitola Circle Committee on Tuesday submitted a memorandum to the Chief Minister through the Tinsukia District...

29 Mar 2014 - 4:47pm | Hantigiri Narzary
Ranjan Daimary faction strongly condemned the Chirang incident where a tribal girl was raped before being murdered.According to the outfit, a particular group has been trying to repeat the 2012...