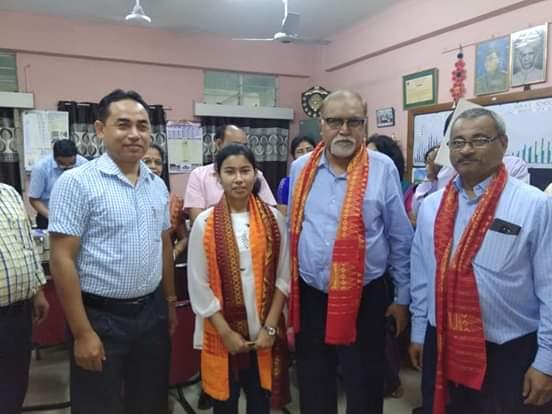 Namrata, daughter of Bhabananda Nath and Buli Rani Kakati Nath, an employee of BRPL,Bongaigaon, has passed the HS(Science) scripting 6th position, has secured 472 marks having letter marks in all subjects.

School authority and Inspector of Schools,Chirang offered warm welcome and felicitated to Namrata following her great achievement with traditional Aronai and bouquet at the school.

Science College, Kokrajhar has secured 86% pass percentage in the HS final examination. A total 94 students pass out of appeared 109, 34 in first, 55 second and 5 in third divisions respectively.

Meanwhile, the Upendra National Academy(UN), Kokrajhar, a private managed Bodo medium school have offered warm welcome and felicitation to the passed out students in HSLC and HS final examination-2019 at a programme held at UN academy complex here in Kokrajhar on Saturday. The programme saw large number of participation from student and parents that look healthy attraction among the audience.

The UN Academy has been doing better results among Bodo medium schools across the state in HSLC and HS final examinations as student’s enrolments are increasing year by year.

The UN Academy has been felicitating the successful students every year and conferred student’s excellence awards those students have made better results in the schools in final examinations.Each of student was felicitated with traditional Aronai, cash money and gift items on the occasion.

Director of the UN academy Krishna Gopal Basumatary told that the UN academy conferred the students excellence award those have performed better results in the final examinations besides felicitating the passing out students of HSLC and HS final examinations. He said that the academy was rendering quality educational services in the school to bring better results since its inception in Bodo medium. He has expressed his hopeful that the academy will be able to make top rank in coming days.

Gogoi vows to to flush out ULFA/KLNLF

13 Aug 2007 - 3:05pm | pbaruah
Guwahati: The three tier Unified Command Stucture hunkers down here in Dispur on Monday to fine tune a set of strategies to flush out ULFA and KLNLF are now camping Karbi Anglong district to make the...