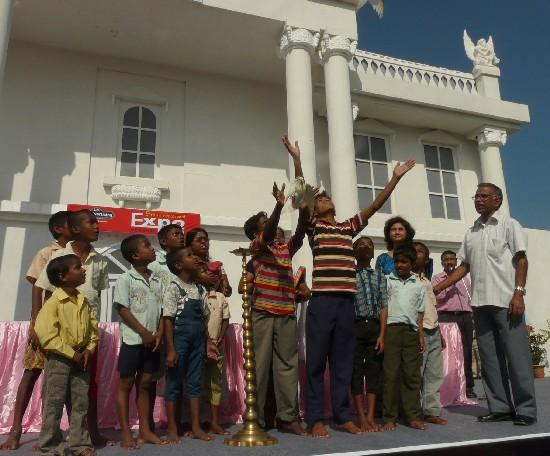 The 9th International Expo which was scheduled to begin from 31st Oct. 2008 began today with a peaceful note. The inaugural program was rescheduled following bloody Thursday episode. The expo was declared open by some orphan kids of Snehalaya orphanage. Father Lucas, Director of Snehalaya accompanied this kids to the AEI Ground. The kids also sang a condolence song besides paid rich tribute to the blast victims. The Expo was declared open by leaving away a pair of pigeon symbol of peace after lighting a ceremonial lamp to fight darkness. The expo has been extended till 16th Nov. 2008 as informed by the organizers.

MA Khan, CMD, Leo Advertising while talking to this correspondent said that we decided to go with orphan kids for inaugural session to co-incide with every common man because the tragic incident has left many kids orphan. We are not all prepared and mentally ready for a ceremonial function as such. Khan also extended his condolences and prayers for the departed soul.

Permalink Submitted by Simanta Phukan on Wed, 05/11/2008 - 19:13
Shop in shops....no more 'Expo's please. Guwahatians were drunk with consumerism till the other day.

NFDB - NERC organises programme on fisheries for students in Raha

22 Dec 2021 - 6:44pm | Dibya J Borthakur
RAHA: A day-long awareness programme on fisheries for school and college students was organised by the National Fisheries Development Board (NFDB), North East Regional Centre, Guwahati, at the...

13 May 2010 - 11:20am | pallavibarua
Nemati ghat in Jorhat. This is one of the three main riverine routes to reach Majuli, the largest river island in Asia. The other two river fronts being Luit-Khabalu ghat from North Lakhimpur and...