Preparation's are in final stage for Durga Puja at Hojai. 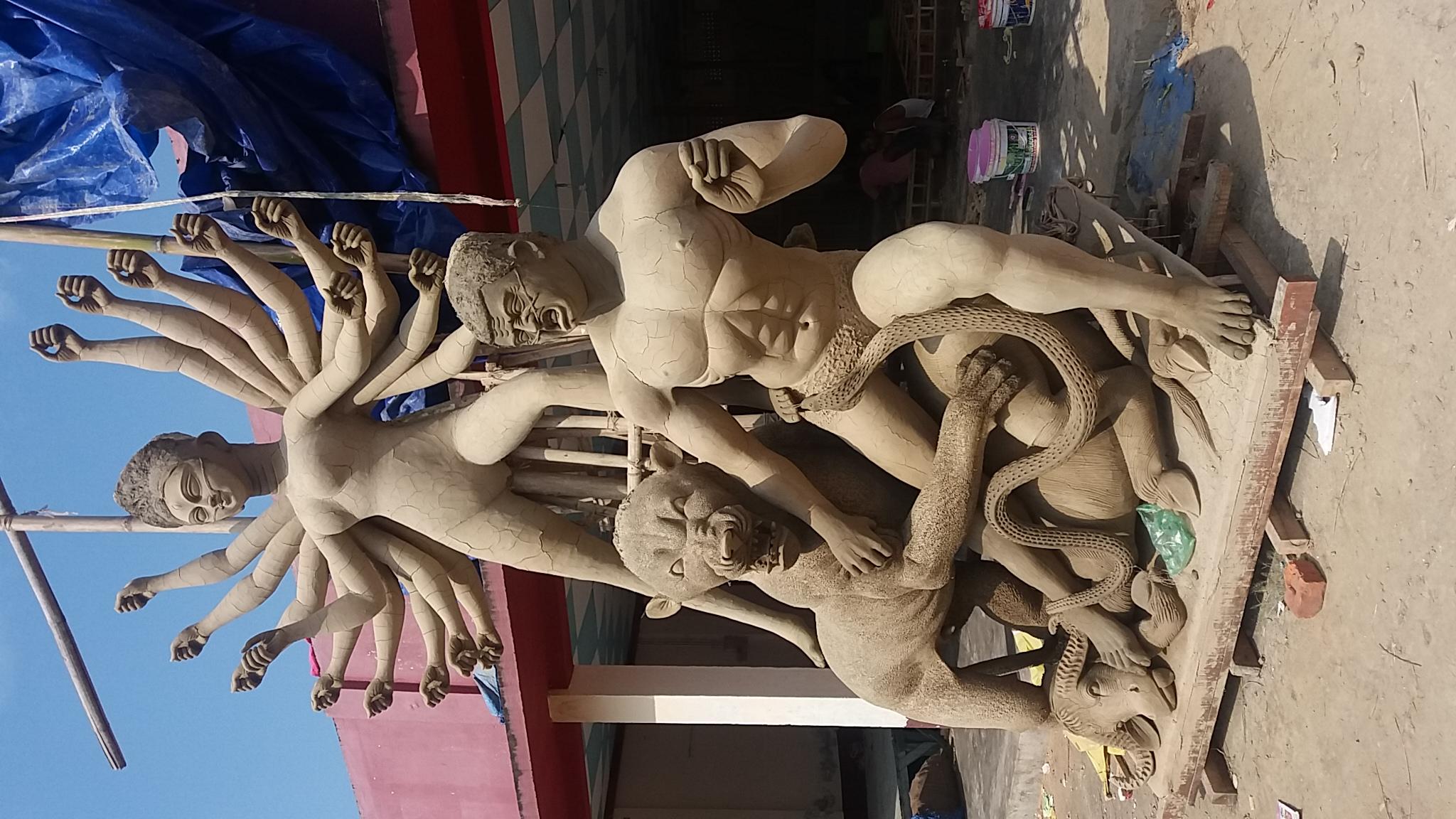 Eighteen Hands Maa Durga Idol at Hojai is a point of  attraction for devotee's since decade's.

Hojai:-With Durga Puja less than  a week away, preparations for the celebration in the Hojai are on in full swing.  Members of various puja committees are working overtime to finish work on pandals in time. While artisans are busy in giving final attractive touch to the idol of Maa Durga along withGanesha,Laxmi,Saraswati and Kartikaye.Tent-house  workers are busy in giving shape to massive theme-based welcome arches and light gates on the streets, lanes and by-lanes of the pandals.This year, Durga Puja celebrations will begin with Sasthi Puja on October 15 while immersion of the deities has been scheduled on October 20.  Inspite inflation and simmering tension over National Register Of Citizens, the enthusiasm ofdenizens of Hojai district is not less for Durga Puja. People want to worship Goddess Durga accordingly as per Vedic rituals  and take her blessings.

In Hojai, Idol of Eighteen Hands Maa Durga is always been an special attraction for the devotees. Since the year 1967, Adarsha Durga Puja Samity is organising this Puja.This is their 52nd Year. The puja samity believes that, when Maa Durga slaughtered  Mahisashur, She was in her 18 hands gesture. So, by which they started worshipping Eighteen (18) hands Maa Durga Idol. Here, puja is done with all the vedic rituals. Another, speciality of this puja is that on the day of Dashmi the mirror (prathibim) of Maa Durga is open for bidding, where the devotees gather and are very excited to take part in the bid, so that they can take the mirror to their house as a blessings of Maa Durga. As per sources, this year bidding for this mirror may across rupees  one lakh and above. It is believed to be the only Puja with eighteen hands in entire Assam.

Sarbajanik Durga Puja Samity at Shivbari in Hojai is celebrating this festival since the year 1935. This Puja is famous for its tallest idol of Maa Durga in Hojai District and  here festivity is always been point of attraction as devotees throng here in thousands.Sarbajanik Durga Puja Samity at Bishnupally in Hojai is celebrating the Durga Puja since the year 1956. This year they are celebrating 62nd Year. This Puja is special for its cultural procession, cultural competition and  Quiz competition during puja since its inception. At Laxminarayan Mandir  Marwari  Durga Puja is famous for it's smooth arrangements. Here devotees along with Maa Durga can worship and seek blessings of Laxminarayan,Hanuman,Ram Darbar and Shiv Darbar.

There are many other Samiittee's in Hojai where the preparation's of Durga Puja are at final stage viz., Govind Ashram celebrating since the year 1940, Natun Bazar Durga Puja celebrating since the year 1947, Bharatiya Durga Puja Celebrating since the year 1984, Nabakalpa Durga Puja Commiittee, Ramkrisha Mission, Bharatsewa Ashram,
Kediapuram,Lalpatty,Jamuna Lal Bajaj road Puja, Puja at Laxmi Cinema campus at J.K Kedia Road,Sahapatty,Govinda pally,Kali Bari,Krishna Nagar,Harijan Colony,Nepali Mandir.
Manipuri Community Durga Puja is special for its different attraction based on Manipuri culture. Here cultural  celebration's are organised as per Manipuri custom.
It is to be noted that this year Ramthakur Mandir Commiittee at Shiv bari road is going to begin the Durga puja celebration for the time this year which will  attract devotees.However, All the Puja samittees has to oblige by the rules and norms issued by District Administration  like every year, for the smooth functioning of Puja without any hindrance.

23 Oct 2019 - 12:19am | AT News
At what point do we question whether PM Modi shares our values? Kashmiris have been restricted from communicating outside their country for 50+ days. In Assam, almost 2 million people are being...