Workshop on Youth and Environment 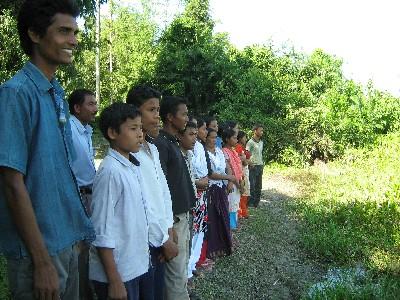 Natures Friend Club, an environmental organization from Dhemaji organized a day long workshop on 'Role of Youth for Environment' at its office premises at Kachari Pathar in the Dhemaji development Block of Dhemaji district. Participating in the workshop as resource person Ranjan K Baruah from Guwahati appealed to the young people to come forward and take active part for the preservation of the environment. "It is important for us to understand the issues and take active part in mitigating climate change", said Mr. Baruah. The workshop was presided by Ghana Sonowal, President of natures Friend Club and was held on 20th October. Most of the participants who were students from schools and colleges asked different questions to the resource person. "Youth from any part of the world can take part in global environmental movement", said Mr. Baruah. He mentioned the activities of global organisation like United Nations Environment Programme (UNEP) and regional network like South Asia Youth Environment Network (SAYEN), and asked the participants to become part of this organizations and networks for better understanding on environmental issues and youth's participation. An Eco tour was also organised as a part of the workshop. Participants were taken to 'Poa Saikia Beel, a wetland in the Noruathan Panchyat. Natures Friend Club was established in 2005 for generating awareness on environmental and other social issues.

25 Oct 2016 - 10:39pm | Dibya J Borthakur
An unidentified body was found in a pond  at Bhati gaon at Raha this morning. According to the police,the body is of a man aged around 45. The deceased was wearing a black colour half pant and a...

10 Mar 2013 - 8:11pm | Ritupallab Saikia
Even though the pages of news papers have increased now a days, we are still missing out on developmental and positive news and it is very unfortunate that now news finds us, we do not find news,...