Come to Assam and get the pulse 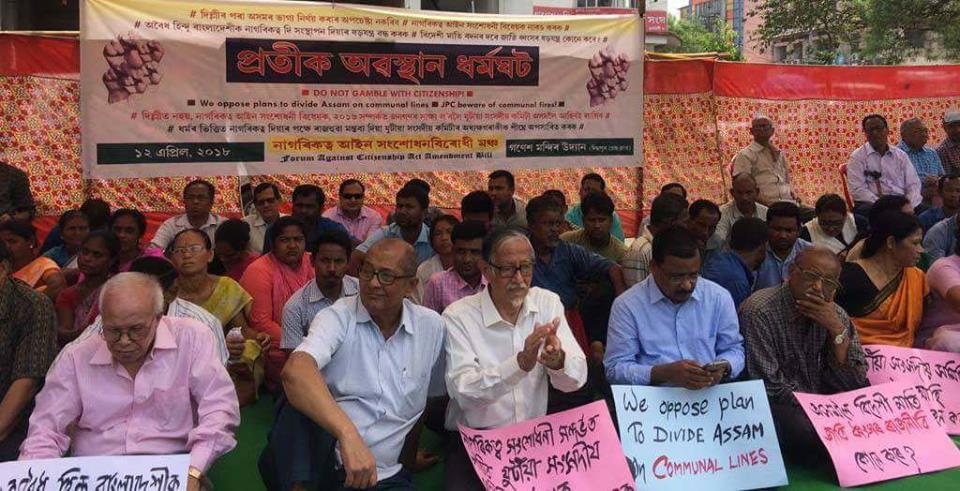 GUWAHATI: Prominent citizens and social activists in Guwahati staged a sit in on Thursday opposing the decision of the Joint Parliamentary Committee on Citizenship (Amendment) Bill, 2016 to institute public hearing in New Delhi.

Led by Dr Hiren Gohian, around 200 people  participated in the sit in asking the House panel to listen to the voice in the state.

They further have asked the invitee organizations to skip the hearing in New Delhi saying that nobody have given them the right to determine the future of Assam in the distant Delhi.

The Joint Parliamentary Committee set up to study the issues centering around the Citizenship (Amendment) Bill, 2016 has rescheduled the April 12 hearing for the organizations from Assam in New Delhi to April 17.

According to information, the House panel headed by Rajendra Agarwal has rescheduled the hearing acting on the suggestions to avoid the clash with the Rongali Bihu.

The panel has dozens of applications and memorandums but has figured out only 28 of these to be invited for hearing in the capital which runs into a hail of controversy. These include the All Assam Students’ Union (AASU).

28 Oct 2011 - 10:45pm | editor
People's Friend Foundation will celebrate the Children's Day on 14th of November, 2011 with a colourful programme. On that Occasion, an Art Competition will be held among students which will be...

7 Jun 2015 - 4:16pm | AT News
A long march to Dispur by the agitating special police officers is believed to have forced the authorities to cut short the journey of two Guwahati-bound passenger trains on Sunday. The Lumding-...