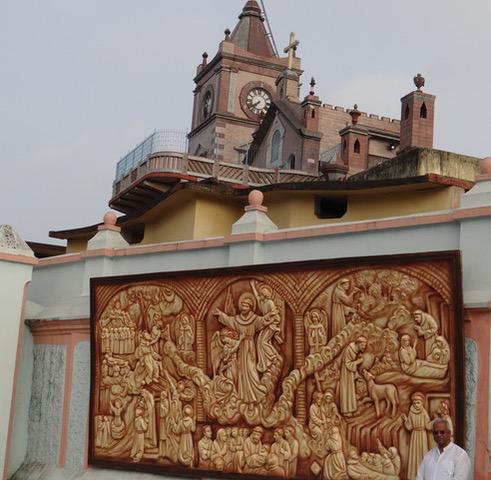 Bandel, West Bengal —   The head priest of the oldest Catholic church in eastern India has called people to “actively promote peace and harmony in these volatile days by extending good will of tolerance and forgiveness to mark Good Friday commemorating Jesus who died on the cross forgiving his enemies.”

“Whatever be our religion or culture, living in peace with fellow humans and in harmony with nature and other living beings as did St Francis of Assisi is the hallmark of Good Friday, and is the only path to co-existence and peaceful living,” says Father T L Francis, prior of Marian shrine at Bandel in Hooghly district.

Pointing to a 20 feet wide and 8 feet high mural depicting the life of St Francis of Assisi, Fr Francis reminds the vsitors, “St Francis is shining example of people living in peace and harmony with fellow beings and nature including the animal and plant kingdom.”

The mural, a unique piece of art executed in bronze finish, shows how St Francis tried to establish harmony with nature, harmony with God and harmony within oneself.

The mural was designed, manufactured and installed by Church Art Kolkata.

“It is the only one piece installed in entire eastern India,” Church Art Kolkata CEO Subrata Ganguly told.

The mural is placed on the left side wall adjacent to the second iron gate leading to the church field.

In his prayer St Francis reminds that, “it is in giving that we receive, it is in pardoning that we are pardoned, and it is in dying for others that we are born to eternal life.”

The 64-year-old prior spoke to pilgrims to the shrine as the Church began the Holy Triduum when Christians commemorate events related the last days of Jesus Christ’s earthly existence including last supper, agony in the garden of Gethsemane, betrayal by Judas Iscariot one of his 12 disciples, arrest, condemnation, way of the cross, crucifixion, death, burial and resurrection.

The priest’s Good Friday and Easter message comes in the wake of Pope Francis’s lenten call for peace and reconciliation among all people of good will.

“Forgive others and tolerate each other,” Fr Francis told visitors, reiterating his previous year’s message alarmed by growing intolerance and strident right wing belligerence unfolding in various parts of the country.

The prior also warned that no development was possible without peace and good will.

A notable moment of grace during this 40 days’ fast and abstinence was, the “24 Hours for the Lord” initiative, which invited the entire Church community to celebrate the sacrament of reconciliation in the context of Eucharistic adoration which took place from 3 pm on Friday, 9 March to 3 pm on Saturday, 10 March. In Calcutta archdiocese, Bandel Church was one of five Churches kept open in five districts for twenty-four consecutive hours, with several priests offering an opportunity for both Eucharistic adoration and sacramental confession.

Another event besides the traditional 3 pm Good Friday service is carrying of the cross.

Immediately after Good Friday service, the faithful will carry a 15 ft hefty wooden cross in procession from the Church and plant it before the cross erected in the church field and hold a prayer service along with a reflection on the meaning of cross and suffering.

Ganguly’s earlier artistic installations in Bandel Church include bronze finish church doors in four places with liturgical symbols and figurines; open air Stations of the Cross which has 54 life size statues; a galaxy of popular saints’ life size statues as well as a musical fountain placed in the church ground in front of the shrine.

The church was established by Portuguese missionaries in 1599 on the Hooghly River, some 60 km northwest of Kolkata.

1 May 2011 - 12:03am | editor
A pedestrian was killed this afternoon when he was mowed down by a water tanker near crowded Imphal Post office on Saturday. The victim died on the spot and the body has been deposited at RIMS...