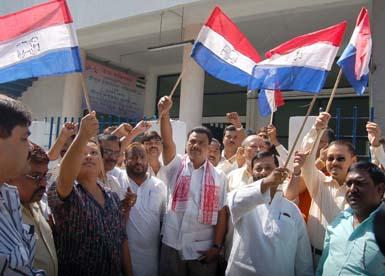 The political equation in Assam is going to take a new dimension ahead of ensuing Lok Sabha and next 2011 Assembly elections with the much talked-about historic unification of the Asom Gana Parishad (AGP) and its splinter groups on Tuesday (14th October). The AGP, with its new president Mr. Chandra Mohan Patowary, is also celebrating its foundation day same day and a “grand ceremony” is being organized at Bhrigu Kumar Phukan Khetra in the Golaghat town in the district of Golaghat to mark both the occasions. The top brass of the party, namely, Chandra Mohan Patowary and Phani Bhusan Choudhuray and others has set out for Golaghat from its head office in Guwahati kick-starting a Sankalpa Yatra Programme at 10 am on Monday (13th October). The former Chief Minister and the leader of Asom Gana Parishad (Progressive), Mr. Prafulla Kumar Mahanta is also expected to arrive at Golaghat in the evening on Monday. Besides Mahanta, Trinamul Gana leader Pulakesh Barua, PLP leader Pabindra Deka, and other AGP leaders such as Rekharani Das Boro, Biraj Kumar Sarma, would join the unification programme. It is learnt that the top leaders of AGP, AGP (P), Trinamul Gana Parishad, Purbanchaliya Loka Parishad and others, meet on Monday evening to chalk out a strategy for smooth functioning of next day’s much-awaited programme.

This Unification Samabesh is very significant from the point of view of the future of regional politics in the state. Mr. Phoni Bhushan Choudhury, working president of AGP, while visited the venue of the meeting a few days ago, rightly commented that the successful completion of the grand programme will determine the fate of the party in the politics of the state. Now, one has to wait and watch the outcome and impact of AGP’s unification in the mindsets of common people. However, it is a common allegation against the AGP and its splinter parties that it failed to keep hopes and aspirations of common people when it was given a chance to rule the state as their “beloved party”, which emerged as a result of the long-fought Assam Agitation led by AASU. It is worth mentioning that Asom Gana Parishad was formed on 14th of October, 1985 with huge support of the people of the state. It is now a lost glory of the party as it was subsequently thrown out of power due to large scale corruption and dishonesty of its leaders.

Needless to say that AGP is trying its best to revive its image in the minds of people to garner support for the 2011 Assembly elections. Party president Chandra Mohan Patowary accepts it when he says, “There is no denial of the fact that the party couldn’t fulfill all the aspirations of the people. But with new commitment and resolve, we are renewing our pledge to fulfill their hopes”. The party has already tied up with the BJP to fight ensuing Lok Sabha elections. BJP leader L.K. Advani’s recent Assam visit would have no importance if the alliance has not been targeted. Now, both the party has been discussing to sort out an acceptable seat-sharing arrangement to fulfill their respective interests. In this context, Advani’s appeal to the people of the state to send maximum number of BJP-AGP Mps from the state to the Lok Sabha is also to be noted.

Meanwhile, an unprecedented busy atmosphere among all sections of people have been seen for the mega event and altogether more than hundred welcome gates have been raised in 37 and 39 No National Highway, Hem Chandra Goswami Road and in the famous Dhudar Ali etc. It is known that all the guest houses and marriage-halls and other public residential halls of the district have already been booked for the delegates and party workers. Mr. Phoni Bhushan Choudhury, working president of AGP informed that a total of 50,000 to 55,000 people would attend the grand function. The leaders of AGP Padma Hazarika, Hironya Konwar, Dr Kamala Kalita and Keshab Mahanta have already reviewed preparations of the event, days ago. Atul Borah, President of the organizing committee says that 90% preparation has been completed.

Adequate security measures have been taken and the district administration is keeping a strict vigil on the whole situation. According to Police sources, security pickets and mobile forces have been arranged keeping in view agitation programmes called by All Assam Students’ Union (AASU), which is dead against of AGP unification with the inclusion of former Chief Minister P.K. Mahanta, whom, they held responsible for the large scale secret killings during his regime. A total of 1200 policemen and some additional police forces of the district have been deputed in the field to maintain security and discipline. There, eight metal detectors have been installed in various entrances so that no “ill-element” can enter into the gathering and can create chaos and disturbances. Rather, jawans of Rapid Action Forces will be ready for any emergency.

It is the peoples’ verdict which determines fate of political parties. Whether AGP will be able to renew and remake its name in people’s mind is largely depended on its new pro-people outlook, if any. But the common doubt of lacking an efficient leader in its front is still remains, which will be the prime determining factor in the 2011 Assembly elections. Uncertainty prevails over the last laugh.

Permalink Submitted by S. Hazarika on Wed, 15/10/2008 - 16:52
Nothing to be happy over unification of AGP. The party is lack of leaders. Corrupted (green house scandal) and guptaghatak have joined hands to lead the party. Darkness looms over the future of AGP.

Permalink Submitted by raktim baruah on Mon, 27/10/2008 - 17:25
Though the writer considers the unification of Asom Gana Parishad is historic but it seems that it cannot bring about a new approach. As we have witnessed the ultimate goal of this so-called unification is to capture power by hook or crook. On the other hand, the coming of Prafulla Mahanta, the prime accused of secret-killing makes the whole process of unification vacuum. It can be conceded that people of Assam never handed over the to the galaxy of corrupted-leaders.

Police custody for Akhil, 5 others

2 Mar 2014 - 6:16pm | AT News
Guwahati police got remand of Akhil Gogoi for four days 12 hours after the KMSS president was arrested on Sunday.Producing him along with five of his associates in the court of chief judicial...

21 Nov 2014 - 6:46pm | AT News
The Central Bureau of Investigation steps up the probe into the Saradha scam where a circle of powerful political leaders is involved.The country’s premier investigation agency probing the scam is...