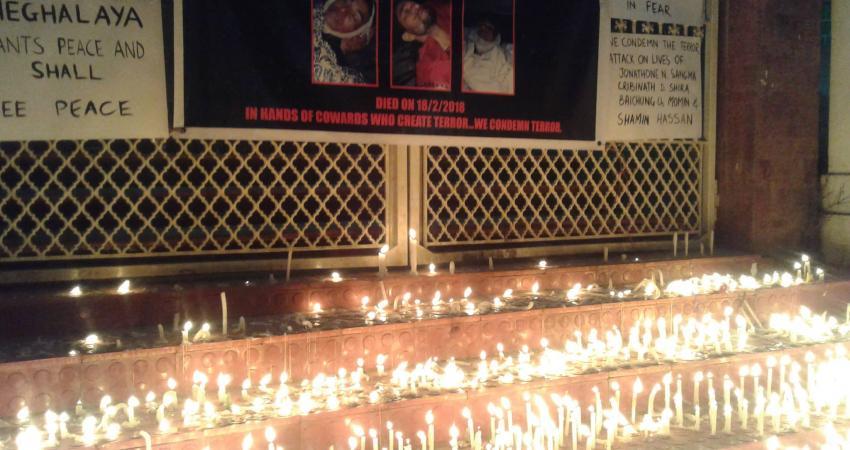 SHILLONG: Amid shock and anger hundreds of people in Shilling took to the streets on Tuesday evening to pay tribute to Jonathone N Sangma and five others who lost their lives in the rebel attack in William Nagar on Sunday night.

The participating people, mostly, lit up candle praying  for eternal peace of the departed NCP leader along with his two associates and two security guards who were killed in attack in Samad as they were on their way back to home after holding a poll rally.

“We are very shocked. We don't have any word to tell you the amount of shock in us. Let's pray for eternal peace of the departed souls,” said Hibbu D Shira, a school teacher in the capital city of Shillong.

Joan D Shira, a College goer said,” we have no option but to seek divine intervention to end this era of murder and mayhem. Enough is enough.”

“It's shocking indeed. I do hope that the prisoners of conscience would wake up. Why do we kill each other. Can we take a vow today itself to end this chapter? It would be better than condemnation” said Dipom Bhattacharya, a local businessman in the city.

Similar programme took place in William Nagar where over 2000 people spilled to the road to join it in the evening. Without any word in the lips everybody prayed for eternal peace of Jonathone and four others.

12 Dec 2019 - 9:48pm | AT News
Peasant leader Akhil Gogoi arrested in Jorhat on Thursday. Gogoi was attending an anti-CAB rally on Thursday at Jorhat. Gogoi was arrested under preventive detention act.

7 Mar 2014 - 5:08pm | AT News
Akhil Gogoi on Friday moved the Gauhati High Court seeking bail five days after he was arrested in connection with the recent self immolation case in Dispur.The court is expected to take up the bail...