AGARTALA: A CPM worker sustained serious injury when two group of political parties clashed with each other on Sunday when the north eastern state was going to the assembly polls in 59 constituencies.

The clash broke out at Golaghati area in Dayaram para in the afternoon.

According to allegations, a group of BJP workers suddenly sprang upon their CPM counterparts where he sustained serious injury.

Identified as Pulin Bardhan, he was rushed to the hospital where he is battling with death. 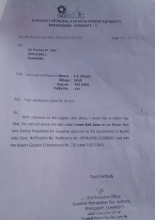 18 Feb 2017 - 6:15pm | Sanjoy K Kakati
Now its confirm. The proposed AIIMS us not coming up in Jalah in the outskirt of Guwahati reviving no less ray of hope for the people in Raha where it was initially proposed. The Raha AIIMS Demand...

19 Jun 2010 - 7:22pm | editor
A delegation of civil society is leaving for Delhi on Saturday to help ULFA and the government break the deadlock over the talk. Main organizer Dr Hiren Gohain is understood to have received a call...

19 Apr 2012 - 11:48pm | editor
Chief justice with Punjab and Haryana high court Ranjan Gogoi is set to be sworn in as Supreme Court Judge on Friday. The high court has already received warrants regarding elevation of justice...