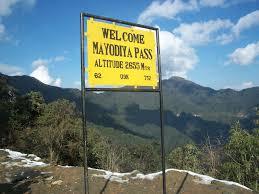 ITANAGAR: Police and SDRF men have intensified the operation in search of the people who have been remaining clueless after the vehicle carrying them to Mayodia in Arunachal Pradesh slipped into a steep gorge on Wednesday. Nearly two dozen police and SDRF personnel have been deployed in the operation which resumed in the morning. Three bodies are believed to have been spotted which five others are expected to be recovered by this afternoon.  The mishap took place in the morning on Wednesday where all the eleven people on tour from Doom dooma to Mayodiya in the Lower Dibang valley district of Arunahal Pradesh. Four passengers were rushed to the hospital after they were rescued.

27 Jun 2012 - 1:15am | editor
Flood waters have submerged the Dibru Saikhowa National Park and Kaziranga National Park as the Brahmaputra and its tributaries are flowing above the danger level. This has forced the animals in the...