Celebrating a decade of the Colosseum (The Assam Tribune’s quiz column), The Colosseum Quiz Fest 2008 is organized by Social Action Network (SAN) in association with the Assam Tribune. This Open Quiz competition is going to be a unique quiz contest, as never before a quiz entirely devoted to culture has been held in the Northeast. This quiz will be held in a major scale, targeting a bigger crowd, and attracting participants from all walks of life, from different towns and cities. It will be a full-fledged quiz contest. It will remain open to all. Two-member teams belonging to any age-group/work-group can participate in this quiz. A written preliminary round will be held amongst the teams to find out the best six teams for the Grand Finale. Utmost care will be taken to maintain the accuracy and authenticity of the questions asked and answers given. The winners of the Grand-Finale will receive attractive prizes in cash and kind. The Colosseum Quiz Fest will be held in Guwahati at the ITA Centre, Machkhowa on 19th October 2008 Sunday.

Due to President of India Visit to Guwahati on 19th the event is scheduled on 26th Oct 2008 Sunday as informed by the organisers today.

24 Dec 2008 - 2:57pm | editor
Hundreds of passengers at the Rajdhani Express got rid of a major tragedy when a powerful bomb missed the target at Matipul in Karbi Anglong district in the wee hours on Wednesday. According to... 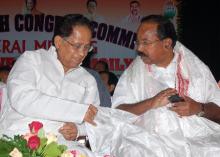