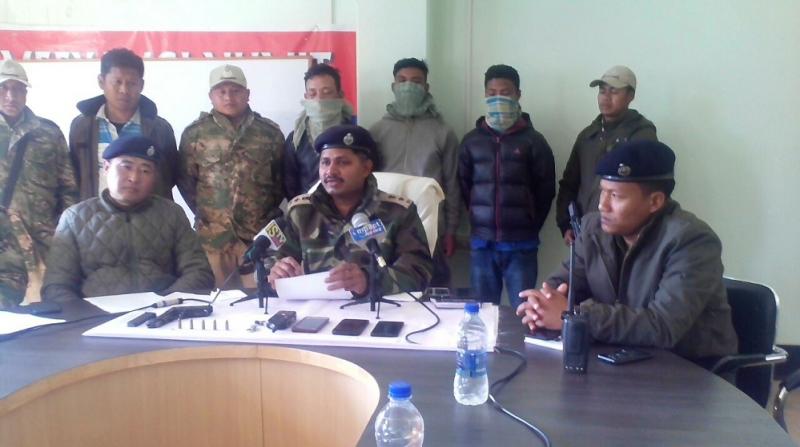 Imphal, Dec 30 (NENA): Police on Saturday claimed to have arrested three militants of the United Naga People Council/Ching Tam Liberation Army (UNPC/CTLA) who were involved in the recent kidnapping of a truck driver who was later released.

Two of the them were arrested at Lamlai Mayai Leikai and the third one at Mantripukhri Friends Colony during operation on December 29 at about 4:30 pm, the statement said.

One 9 mm pistol loaded with five rounds in the magazine, four mobile phones along with Sim Cards, one Dio scooter red in colour were recovered from their possession.

Lamgoulun Misao and Moirangthem Bungcha Meitei disclosed that on December 28 their group kidnapped one Tata truck driver Adakho mao from Motbung in between Pangmol and Kholep villages under Sapormeina Police Station on the instruction of Major Anagam of the outfit for a ransom of Rs 13 lakh, according the police statement said.

It said that accordingly during the operation the police tactically made them to release `the driver safely.

The arrested and the recovered items are being handed over to Lamlai Police Station for necessary legal action, it said, adding that Sapormeina police will also be informed for action.

4 Aug 2016 - 5:37pm | Sanjoy K Kakati
Miffed at the decision to set up the proposed AIIMS in North Guwahati, many local organizations and individuals in Raha will stage dharna in Dispur on August 8. Disclosing this at a press conference...

16 Jul 2014 - 9:07am | AT News
Japanese encephalitis starts wreaking havoc claiming 15 people so far forcing the government to step in. According to information, the victims include four children in the age group of two years to...

18 Apr 2016 - 4:41pm | Shajid Khan
The normal life was ground to halt at the buisiness and educational town of Udalguri district due to the 12 hour bandh called by All Adivasi Students' Association of Assam (AASAA) in protest against...