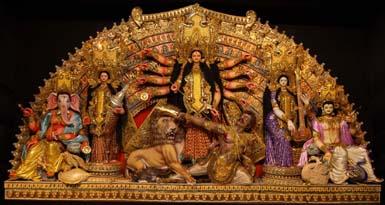 Rupom added that the reason for initiation this award since 2007 are to give the people of Guwahati an opportunity to also express their views about the puja celebrations and the best Puja Pandal in the city according to them and to recognize the efforts of the various Puja Pandals in organizing and presenting a spectacular show and encourage them to do better, on the lines of similar contests held in other metropolitan cities of the country.

BIG Puja Awards are the two different awards namely:BIG Public Choice Award & BIG Jury Award The panel announced the list of the 8 nominated Pujas. The BIG Public Choice Awards will be decided by SMS votes received from the listening public of Guwahati. Speaking on the occasion, Mr Swapan Sinha, Station Head of BIG 92.7 FM, Guwahati said that "It is a great honour for BIG 92.7 FM to join the people of Guwahati in recognizing and celebrating the tradition of Sarvajanin Durga Puja and encouraging the organizers to higher standards of excellence and service. These awards will highlight Durga Puja Celebrations of Guwahati to the rest of the country and make us proud.

2 Feb 2016 - 4:16pm | AT News
Contrary to apprehension ULFA(I) has come in support of the South Asian Games in Guwahati and Shillong much to a major respite for the security forces. In statement ULFA-I chairman Abhijit Asom said...

16 Jul 2015 - 8:30am | AT News
A protestor died hours after policemen thrashed him when he along with hundreds of people hit the streets in Tinsukia alleging government failure to ensure life and property.Identified as Dinabandhu...

31 Jul 2014 - 7:36am | AT News
Acute Encephalitis Syndrome and Japanese Encephalitis continue to wreak havoc 305 lives in the state this year itself.  Talking to Assam Times, health department officials said that the vector-...