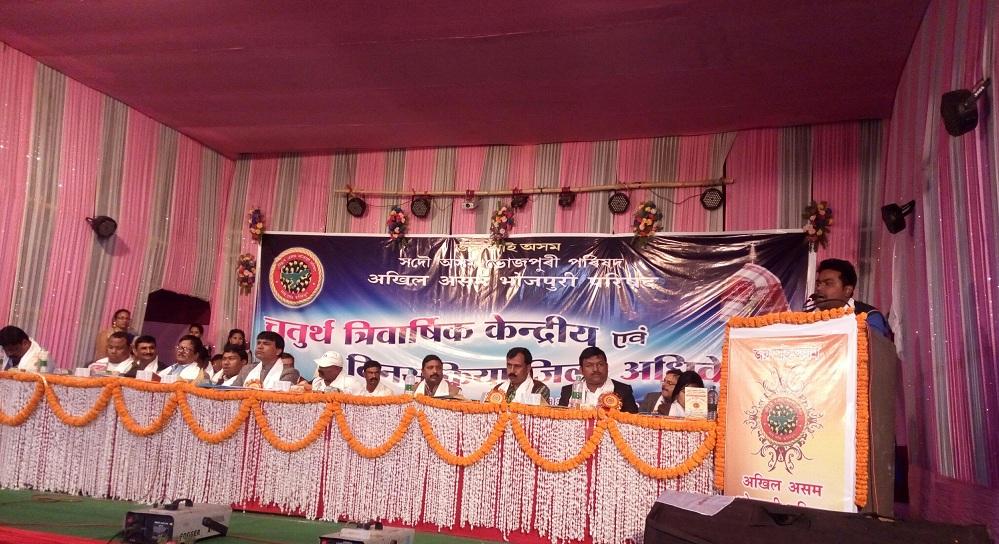 MARGHERITA: The Hindi-speaking people in Assam vowed on Sunday to work for uplift of the greater Assamese society, a pledge that drew appreciation from former ULFA leader Jiten Dutta.

The clarion call to stand United with the indigenous lots came up on Sunday when the Bhujpuris in the state concluded their three days triannual convention in Margherita on Sunday.

In his address at the open session newly elected president of the organization Kailash Prasad Gupta said the Hindi speaking people in Assam has reasons to call Assam their motherland since they have merged with Assamese language, literature and culture. "I appeal to all of my Bhujpuri friends to work for a greater Assamese society. This is our motherland."

Noted social worker and former ULFA leader Jiten Dutta said only an United stand can boost bonhomie of the Hindispeaking people with the indigenous Assamese lots. He said,"ULFA was born to safeguard the interest of Assam, it's people, their language and culture. But lots of misconception, misinterpretation and misunderstanding have given the rebel outfit a wrong impression in the minds of the people. We must stand up."

Dibrugarh MP Rameswar Teli, former Doomdooma MLA Ram Prasad were prominent among those who were present apart from many local organization leaders.

1 Jul 2015 - 8:18pm | AT News
Amid his unrelenting crusade against Assam Public Service Commission, Akhil Gogoi demanded forensic test of the answer sheets of five candidates which would reveal the real picture of the rampant...

29 Jun 2007 - 5:47am | Rituparna Goswami Pande
Dr Tapan Barthakur was recently conferred with the prestigious Indian Association for the Advancement of Veterinary Research (IAAVR) Field Veterinarian award 2007, by IAAVR and the Indian Veterinary...