Atleast ten people were killed, more than 40 others have been injured in the communal clash that broke out between Bodos and Bangladeshi immigrants at Rowta in lower Assam’s Udalguri areas. Security forces have been deployed in the area but by the evening the situation has already spanned out of control.

The flare-up broke out on Friday morning and by the evening it was spreading to the adjacent areas Ikarabari, Sonepur, Lalding, Shivpur, Shyambari and Bothaipara under the Rowta Police station forcing thousands of people in the area to leave their house. As many as ten villages have been torched belonging to both the communities. According to information, these people are camping in the schools and colleges.

The clashes broke out in Simaluguri village where two Bodo villagers were seriously injured and admitted to Tezpur Civil Hospital. Senior police officials rushed to the villages and brought the situation under control but tension again escalated in the district after an unidentified body, belonging to the minority community, was recovered in the afternoon from the campus of the Deputy Commissioner's office.

The injured have been rushed to the nearby hospitals in Mongodoi and Tezpur. More security personnel are being deployed in the district to thwart escalating violence.

Meanwhile, Chief Minister has ordered the local administration to deal the issue firmly. The administration has already clamped carphew and issued shoot at sight order. 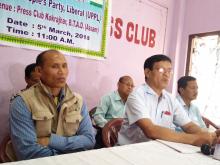 6 Mar 2018 - 10:52am | AT News
Kokrajhar: Amid an escalating controversies over the land rights of both tribal and non-tribal in BTAD areas, the United People’s Party Liberal (UPPL) appealed to all sections of people to have...

12 Aug 2015 - 12:23pm | AT News
Speakers after speakers blamed both Delhi and Dispur for the failure to implement the Assam Accord even 30 years after it was signed.Participating at an AASU-sponsored seminar on the historic pact in...

5 Sep 2016 - 8:05pm | Jayanta Kumar Das
The visit of the newly appointed Darrang DC Ashok Kumar Barman to the historic Raghunath Kuwnori xatra on September 3 recently was widely appreciated by the public.It is noteworthy that a day...