GUWAHATI:Top Assam BJP leaders will soon hunker down with central leadership to ensure safe passage of the Citizenship Amendment Bill, 2016 to ensure safety of the Hindu Bangladeshi immigrants.

Senior party leaders in Guwahati told Assam Times that they are worried over the fate of the Hindu immigrants whose names won't be included in the NRC. Non inclusion of their names in the updated NRC would create problem for them to settle in the north eastern state.

The state BJP leaders at a close door meeting in Guwahati on Tuesday agreed to mount pressure on the Centre to ensure safe passage of the controversial bill in parliament before the publication of the NRC final list.

A section of party leaders further urged the central leaders even to approach Congress leadership in Delhi for help in Parliament.

Notably, a massive protest inside and outside Parliament last year forced the government to stop the process to proceed with this bill and the parliamentary committee set up to study it could not visit the state.

1 Jun 2014 - 6:56am | AT News
The 5 member delegation who demand Tarun Gogoi to b retained as Chief Minister is back to Guwahati a day after they met the AICC panel. The have not revealed the details of what they talked to the... 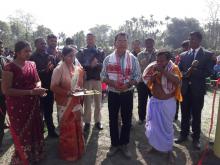 29 Mar 2014 - 9:08pm | AT News
Apprehending law and order breakdown after the sensational rape and murder of a tribal girl in Boldia gaon, the Chirang district administration has clamped curfew on Saturday.The curfew in the entire...