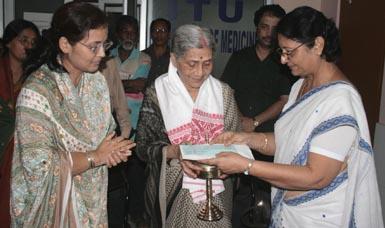 The Leo Advertising group institutes annual awards in various field of day to day life. This year LEO SHILPI SANMAAN 2008 award was presented to Dilip Sharma veteran singer of yesteryears and Sudeshkshana Sharma today. However this awards were supposed to be awarded at a mega event the biggest shopping carnival of Eastern India The 9th International Leo Expo 2008 at Assam Engineering Institute (AEI), Chandmari Guwahati which is scheduled to begin from 13th October 2008. The award that carried a citation and Rs. 1 lakh along with a traditional Assamese Sarai was presented at Guwahati Medical College Hospital (GMCH), Bhangaghar where Mr. Dilip Sharma is admitted following serious health reasons. National award winning Assamese cine actor Moloya Goswami and Preety Saikia wife of eminent writer Bhabendra Nath Saikia presented this prestigious award. Assam Times wishes speedy recovery of the legend singer and congratulates both the awardee.

Meanwhile well wishers of Dilip Sharma have made line up at the hospital wishing his quick recovery and sound health. The awards in other field will be given away at the mega shopping carnival that will conclude on 31st Oct 2008. This year the ambassador for the 9th International Leo Expo 2008 are Nishita Goswami, Prastuti Parashar and Zerifa Wahid all Assamese cine and theater actress.

1 Feb 2012 - 11:34am | editor
Dr. D. N. Barua, an internationally reputed Scientist, a versatile personality and a prominent senior citizen of Jorhat breathed his last on 22nd January at 8.10 a.m. due to cardiac arrest at Jorhat... 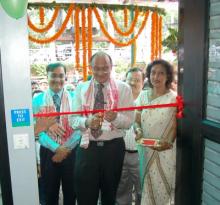 18 Aug 2007 - 7:45am | swapan
State bank of India inaugurates its 183rd ATM of the North East Circle at Dispur under Dispur Branch. This is also the 35th ATM in Guwahati, which is dedicated to the service of ATM customers.The...