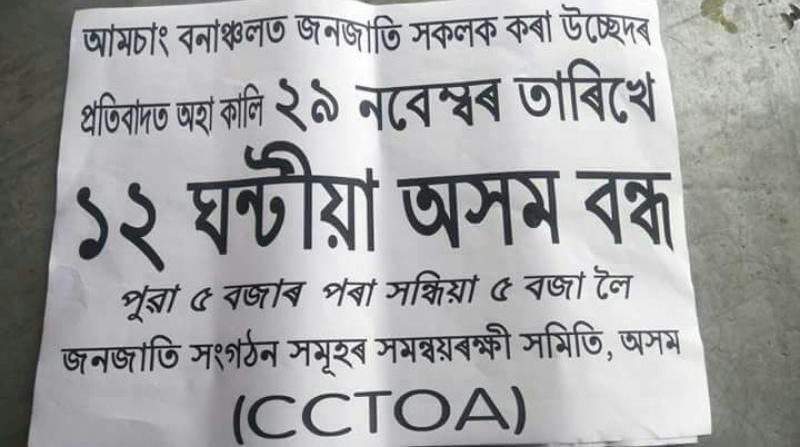 GUWAHATI: Normal life comes to a grinding halt on Wednesday following the 12 hour statewide Assam bandh call by the Tribal Coordination Committee, a conglomeration of many tribal bodies who are dead opposed to the ongoing eviction drive at the Amchang wildlife sanctuary.

Roads, mostly, are remaining deserted with no vehicles plying from early in the morning. Shops and markets, schools and colleges, banks and offices are not opening under the impact of the bandh.

A section of the schools is holding examinations after the bandh supporters have announced exemption.

The bandh is total in Guwahati since the massive eviction drive is going on in the outskirt of the city. However, train and flight services are running smoothly.

Bandh supporters in many places have been trying to enforce the call by burning tyres on the road.

Security forces are fanning in the sensitive areas to avert any untoward incident during the bandh hours.

Talking to Assam Times over telephone, the tribal leaders said the bandh would come into force from 5 in the morning which would end at 5 in the evening.

They alleged that instead of listening to the landless lot, the BJP led Sonowal government had been evicting these indigenous people without any mercy. They said more massive agitation would follow soon.

29 May 2010 - 1:12pm | editor
The London Bihu Committee (LBC) held their annual Rongali Bihu celebration on Sunday, the 2nd May 2010 in dreadful weather conditions, that were typically British. Still, few people let that stand...