Forest minister Pramila Rani Brahma is shocked to have learnt the repeated incidents of jumbo death due to electrocution and rail movements.

Talking to reporters in the sidelines of s function in Kokrajhar on Thursday she  expressed concern over the increasing of the wild elephant’s deaths across the state and blamed the power department.

She said that forest department has been trying to end the deaths of wild elephants accidental deaths with necessary measures. She said that elephants death is increasing day by day in the state on various occasion which are becoming very sensitive for the state. 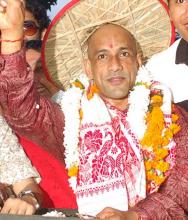 24 Jun 2009 - 9:35pm | editor
Mahadev Deka, who recently clinched the title in the bantam weight category for India at the 2009 Musclemania Superbody world championship at Florida, US, got warm welcome when he arrived at the...

26 May 2014 - 1:00pm | AT News
Its confirm. Sarvananda Sonowal get a berth in the Narendra Modi’s council of ministers on Monday. Modi himself confirmed it to Sonowal at a meeting in Gujarat House in New Delhi in the morning....