GUWAHATI: Yet another tainted officer wanted in the APSC scam has surrendered before police four days after she went underground.

She is none other than Sunayana Aidew, the tax superintendent posted in Nagaon. Then she was immediately attested to be produced before the special court which remanded others to 14 days police custody.

The nephew of rail minister of state Rajen Gohain came to Guwahati early in the morning and surrendered before the special operation unit set up to probe the scam where 19 ACS, APS and allied service officers were arrested.

18 Jun 2012 - 3:18am | Daya Nath Singh
Mahatma Gandhi National Rural Employment Guarantee Act (MGNREGA) is a revolutionary Act of the Government of India with tremendous potentiality of eradicating unemployment situation in the country.... 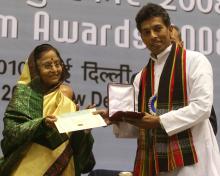 30 Nov 2009 - 9:11am | Juthika Das
Barpeta district CPI(ML) today observed jail-bhoro programme protesting against the skyrocketing price hike and the continuous corruption in implementing the various NREGA schemes of the entire...