One after another speaker in a public  meeting presided by Bhaba Gogoi, heaped praise on prime minister Narendra Modi in support of the economic policies where the common people have been heaving a sigh of relief.

Protest by teahchers at nazira

19 Sep 2013 - 9:49pm | SK Hasan
64 elementary teachers of Nazira who were appointed under operation black board scheme were not paid salaries for last 19 months. While protesting on Thursday, they have destroyed the block... 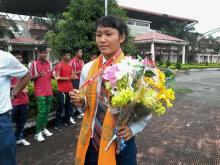