For Salbagan,Uranjay Brahma netted first goal in 31st minutes against Sanswrang. Again Joseph netted second goal in 36th minutes which led the team 2-0 in the first half. Mitinga Narzary again netted third goal in 80th minutes in the second half against Sanswrang and the won the trophy in 3-0 goals.

Nijwm Basumatary of Salbagan was adjust best player in the championship and was awarded trophy and cash 1000.

Indramahan Brahma, ex-BTC MCLA given away runners up trophy and cash Rs. 10,000. The football trophy was organised by Ramfalbil anchalik sports association (RASA) in memory of late Kanakeswar Narzary, founding general secretary of the All Bodo Students Union (ABSU). 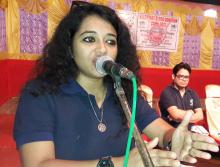 16 Sep 2017 - 1:10pm | Shajid Khan
In a bid to bring about awareness on organ donation among the younger generation, a local NGO 'Rising Hands' in collaboration with Zublee Foundation organized an awareness programme on cadaver...

8 Jul 2009 - 8:38am | editor
Three persons were killed, over 35 others have been injured when a passenger bus fell on a bridge in Burhaparah on the way to Jorhat on Wednesday morning. According to information, three persons...