Most parts of Imphal and its surrounding areas witnessed water logging due to continuous rainfall in the past 24 hours.

The state witnessed incessant rainfall throughout Monday giving trouble to people across the state. Rain began to lash the state since late last afternoon. Due to continuous rainfall, there is water logging in many areas of Imphal and other parts of the state.

Rain has left paddy farmers tense as harvesting of the crop is around the corner.

More or less the entire region of Northeast India has been witnessing dry conditions since past few days, however now the weathermen expect rain to increase significantly over NMMT (Nagaland, Manipur, Mizoram, and Tripura, according to Skymet Weather.

The report said this aforementioned status will witness light to moderate showers with one or two heavy spells until October 21. 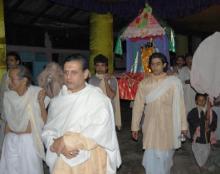 3 Feb 2014 - 5:17pm | AT News
The Opposition parties are all set to urge the election commission to ensure a free and fair Rajya Sabha polls in Assam slated for February 7.AGP sources told Assam Times that they will soon sent a...