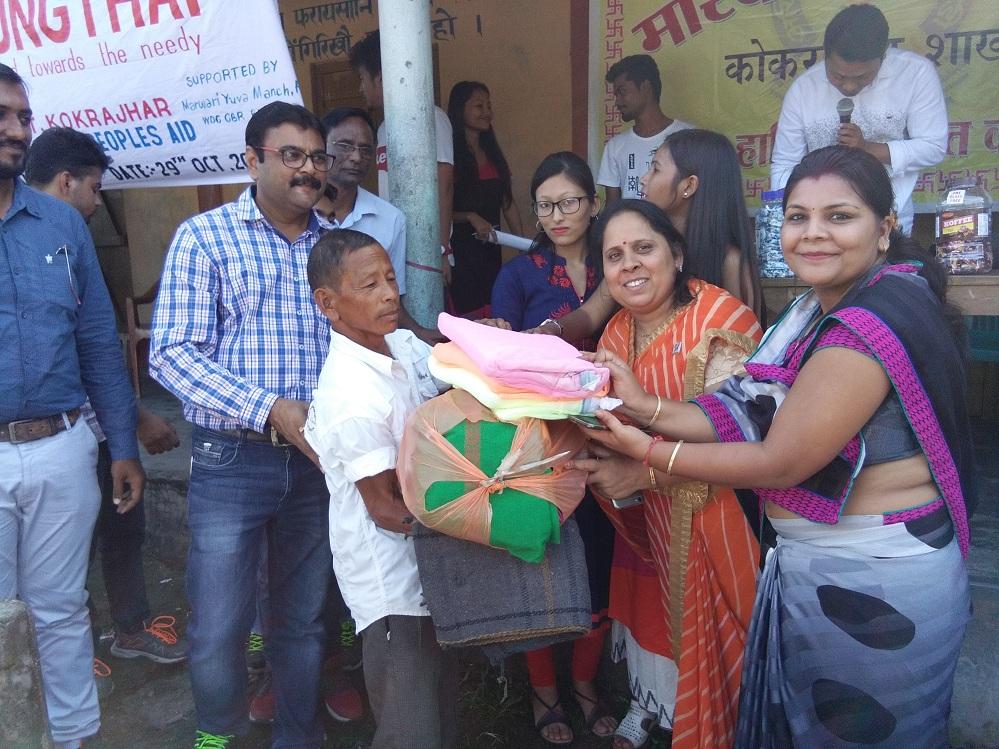 A mass warm clothes distribution programme among remote needy peoples was organised at Sonapur Lalai village along the Indo-Bhutan border area in Chirang district on Sunday.The peoples from the area hailed the initiated by NGO,social organisations for extending aids among the remote citizens.

The social noble venture was organised jointly by the Peoples Aid, a Charitable Trust,Kokrajhar; Marowary Yuva Mancha and students of Central Institute of Technology(CIT) Kokrajhar,which was carried under the initiative of human services among needy and poor people’s at the remote areas. The initiative has been noticed following few days ago, photo of Monalisa Mushahary, a class IV student was viral in social media, who appeared her third evaluation examination carrying her younger sister on her-back. Today, NGO,social organisation and CIT jointly come forward to make helping hand to the remote peoples and distributed warm clothes among citizens. The goods are included blanket, mosquito net, warm clothes, Dokhona and daily need materials worth amounting of Rs Two lakhs. Altogether 73 families from Sonapur Lalai and Sosipur village of Chirang district, which been covered up nearly 700 population from Bodo, Nepali and Adivashi communities, who are living at remote along the Indo-Bhutan border.

Marowary Yuva Manch,Kokrajhar branch also extended cash Rs. 5,100 financial support to Monalisa Mushahary, a student who appeared her evaluation examination carrying her younger sister on her back. Maneswar Daimary,adviser of the Peoples Aid, Dilip Sethia,adviser Marowary Yuva Mancha,Nava Basumatary,president of the Peoples Aid, students from CIT handed over the cloth and some other needy materials among citizens.

Morin Daimary, secretary of the Peoples Aid said that the charitable trust distributed warm clothes among remote peoples in association with Maroway Yuva Mancha and CIT students.The remote citizens are living under hardship in the villages along Indo-Bhutan border areas in Chirang district. ‘We have distributed several clothes including blanket,Dokhona and needy materials’, he said.

A student from CIT Kokrajhar said that the students has been initiating to distribute warm cloth and some other needy goods among remote citizens, who are hand to mouth in their living at the villages.The CIT students has been taking social venture under Technocracy of 2017 in the remote areas.Koken Narzary, village headman of Sonapur Lalai thanked the NGO organizer and social activists,who have extended mass cloth distribution at the remote villages in Chirang district. ‘We are very happy that peoples from Kokrajhar NGO,CIT and Marowary Yuva Mancha reached at the remote village to distribute cloth and some other needy materials from their human services heart’, he said.

5 May 2011 - 2:07am | editor
The Chief Minister of Assam State, India, H.E. Tarun Gogoi, today told administration officials at the Asian Institute of Technology (AIT) in Bangkok, Thailand, that his government remains...

4 Mar 2016 - 1:34pm | Hantigiri Narzary
A self styled deputy commander in chief of Kamatapur Liberation Organization (KLO) was killed in an encounter with security forces at Shiljan area in Kokrajhar district today. He was identified as...