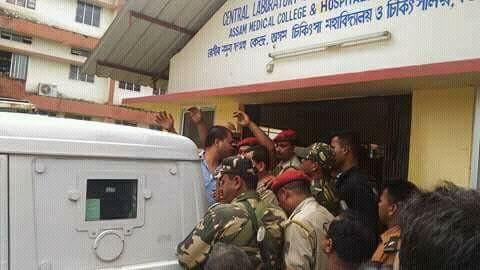 KMSS leader Akhil Gogoi is undergoing treatment at the Assam Medical College Hospital in Dibrugarh where he was admitted a couple of hours back on Friday.

Gogoi, who had been languishing in Dibrugarh Central Jail since he was arrested for his objectionable speech at a meeting, was rushed to the hospital in the morning.

After a two hour long medical test, the doctors suggested the authorities to admit him for a better treatment of skin infection which he complained inside the jail.

A month after he was arrested for his objectionable speech, Gogoi later was arrested under the National Security Act.

5 May 2018 - 10:43am | Akshaya Pranab Kalita
NAMRUP: Bihu festivity still grips Namrup as the industrial town is holding a three days festival amid much pomp and gaiety. People thronged in thousands at the Namrup BVFCL Public Bihu ...

2 Dec 2007 - 2:31am | pbaruah
The Criminal Investigation Department is spreading its tentacles to unearth the truth behind the Rs 30 crore scam that rocks the Tenth Assam Police Battalion.For the last two days, the investigating...