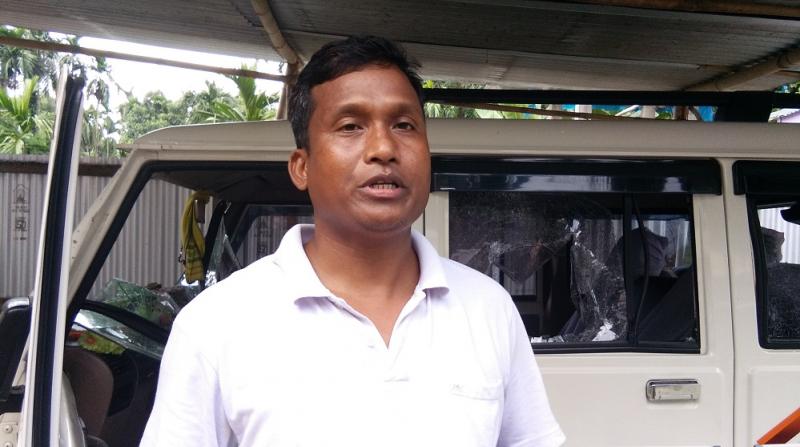 Around 10-15 unidentified miscreants arrived at the Balagaon residence of Abhiram Ray, former AKRSU leader by 10.15 am in the morning and later vandalizes Bolero vehicle of Ray bearing registration No. AS 16E-5855 parked inside residence.

Ray, ex-AKRSU leader told that the miscreants visited his residence and asked him to accompany them for a meeting not disclosing the name of the place they would have the gathering.

However, later when Ray was about to accompany them, a group of at-least 10-15 miscreants vandalized his Bolero vehicle and the window panes of his house which damaged severely. He said that miscreants tried to kidnap him as they forcefully called him for going undisclosed place. He said that he didn’t know the incident as he and family face such incident. ‘This is a case of personal attack and the way they conversed with me it is clear that they had an intention of kidnap’, Ray said.

An FIR has been lodged with police in this regard. It may be mentioned that Ray was a part of the students union from 2001 to 2003 and later left the body as he got involved in his personal work.

Police official rushed the spot and started its investigation into situation.

16 Nov 2016 - 10:39am | Shajid Khan
63rd edition of Raas Mahotsav has got underway from November 14 on the premises of Raas field at Tangla Kukurakata in Tangla. Tangla Nonaipara Sarvajanik Raas Puja Committee is the oldest in the town...

17 Feb 2012 - 4:51am | Anup Arandhara
Ali Ai Ligang the vibrant agricultural festival of Mishing tribes of Assam is celebrated in many places of Sivasagar district on Wednesday. The Sivasagar Bangke-Mishing-Dirbi-Kebang and Ali-ai-...

16 Dec 2017 - 9:24am | AT News
KOKRAJHAR:A dreaded NDFB-S rebel is undergoing bullet injury treatment in hospital after he was trapped during the recent counter insurgency operation at Dhumbazar in Kokrajhar. Identified as Maothi...