Assam Rifles seized 12,125 pieces of WY tablets worth around Rs 60.62 lakh in the market and arrested five suspected drug peddlers in two separate incidents at Khudengthabi security check post on Imphal-Moreh sector of NH-102 on Monday.

In the first incident, the 12 Assam Rifles of 26 Sect Assam Rifles under the aegis of HQ IGAR (South) apprehended four individuals with 3000 pieces of WY tablets at Permanent Vehicle Check Post (PVCP), Khudengthabi of Tengnoupal distict, according to a statement released by PRO of IGAR (S), Imphal.

At around 9:30 am, one blue colour ‘Maruti A Star' vehicle bearing registration No DL 8C P 3710 moving from Moreh to Imphal was stopped for checking. Three individuals travelling in the vehicle requested passage, citing poor health of one of the individual’s father in Imphal.

On checking their vehicle, 3000 WY tablets worth Rs 15 lakh were recovered, the statement said.

All the apprehendees were handed over to Moreh Police Station along with the recovered contraband items.

In the second incident, a silver colour Maruti van bearing registration No AS 01 AH 6821 moving from Moreh to Imphal was stopped at check post Khudengthabi for checking around 1:30 pm. The movement of the driver appeared suspicious. After thorough search of the vehicle, 9125 WY tablets worth Rs 45.62 lakhs were recovered.

The recovered drugs along with apprehendee was handed over to Moreh Police Station, the statement said. 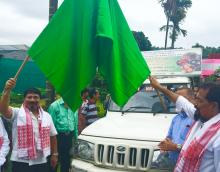 9 Jul 2013 - 11:24pm | AT News
The overall flood situation deteriorates further. Some more villages have come under water. With these, the number of villages under water in Dhemaji, Chirang and Lakhimpur districts has gone up to...