The United Liberation Front of Asom (I) has strongly opposed thr move to resume the mega dam works to generate hydro power and the proposed river linking project.

In a statement released to media on Sunday, ULFA(I) chairman Abhijit Asom said both the  initiatives would invite disaster for Assam.

He said the river linking is not the solution to help the state get rid of the perennial flood and erosion and instead it would put the state into an era of unending dry spell.

According to him, same danger lies with the mega dam project. He said the megs dam would invite disaster on the time of earthquake.

But the ruling clique in Dispur lacks courage to oppose it to their bosses in the distant Delhi. They can't oppose even the conspiracy to pilfer the fabulous water resources ftom the state. 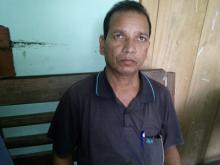