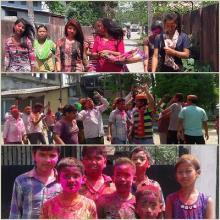 24 Mar 2016 - 5:35pm | Shajid Khan
With the rest of the state Holi, the festival of colours, was celebrated with all the traditional mirth and religious fervour in the town on Wednesday and Thursday.  People cutting across age,...

27 Dec 2009 - 7:25pm | editor
The dreaded H1N1 claims its first victim in Assam when a 20 year old college girl dies at GMCH on Sunday. According to information, Sikha Biswas a student of Hiteswar Saikia College in Panjabari in...

6 Feb 2008 - 4:29am | editor
Two Karbi Longri National Liberation Front (KLNLF) militants have been killed in an encounter with Army in the Nambor Reserve Forest in Golaghat district in Assam on Thursday. According to...